Internet of Things in the Real World, Part 1

The Internet of Things has been riding the crest of a wave of attention in the technology and financial media in recent years.

“We think the Internet of Things (IoT) will be a transformational trend over the next 10 years,” says Simona Jankowski, of Goldman Sachs Global Investment Research. The ability to adapt to it “is very likely to determine who the next set of winners and laggards will be in this new connected age.”

There is general agreement that the term was introduced by Kevin Ashton, co-founder of the MIT Auto-ID Center in a 1999 speech to Procter & Gamble about using radio frequency identification (RFID) in the supply chain. Thinking about it 10 years later he explained that he was highlighting his belief that “Computers — and therefore the Internet — are almost wholly dependent on human beings for information.”

On the surface it would seem that this contradicts the view that IoT is about things communicating with other things over the Internet.

The most important question to ask about the Internet of Things to bring greater clarity is, what is it? The answer is neither simple nor obvious. Many people offer many different definitions. This is partly because there really are different IoTs. 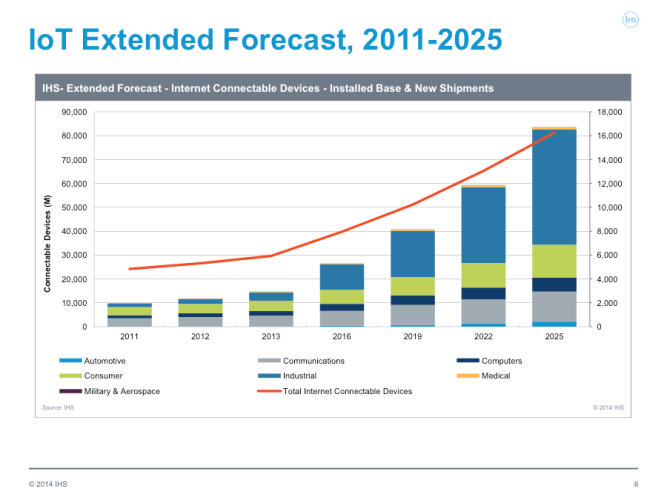 The left-hand axis represents the installed base of connectable units and the right-hand axis represents shipments (in 1000s). Source: Bill Morelli, IHS
“It’s about enabling connectivity and imbedded intelligence in more devices,” says Bill Morelli, IHS director, Internet of Things and M2M. He adds more generally that the IoT is about the communication of useful information between devices. In this sense, it's important to keep in mind that IoT is in itself not a thing but “a conceptual framework,” Morelli says.

But if IoT is about connection of devices with stored intelligence, then isn’t that the same as machine-to-machine (M2M) communication? Morelli says that while M2M is a subset of IoT, it does not represent the whole. Instead, IoT also includes machine-to-people, people-to-machine, people-to-objects and objects-to-people connections , he says.

Ultimately, it might be possible to have an Internet of Everything, where every device and every person can exchange useful information with every other. But that is closer to the realm of science fiction than to possible reality, which is not to say it will never happen, just not anytime soon. For now, a useful starting point is to discuss “things” that already have embedded intelligence and the ability to communicate. These are the most likely to be included in the web of connections that can communicate useful information, the very definition of the IoT.

A variety of devices already contain a great deal of data as the result of the growth of automation and communications systems. Indeed, "the Industrial Internet Revolution is already underway” according to the 2013 GE report Industrial Internet: Pushing the Boundaries of Minds and Machines. The report explains that although Internet-based technologies have been increasingly implemented over the past 10 years, they have been used in discrete, siloed applications.

Morelli says the IoT will be built on accessing stored data, converting that stored data into useful information and integrating it on a system level with other pieces of information so that ultimately it can create “complex information systems that are greater than the sum of the individual components.”

The GE report looks at electric power generation, oil and gas extraction, air and rail transportation and healthcare. Morelli includes factory automation, lighting, security systems, building automation and electronic funds transfer. This article, the first in a four-part series to be published between now and December, focuses on factory automation.

The ultimate vision for the Industrial Internet of Things is that it can produce a worldwide convergence of systems of production and distribution. This will “open up new frontiers to accelerate productivity, reduce inefficiency and waste, and enhance the human work experience,” according to the GE report.

The development of the Internet of Things will be an evolution, not a revolution, says Mike Fahrion, director of product management at B&B Electronics. There will be no light-switch event to trigger it. And the Iot is happening now because of the convergence of a number of factors.
For one thing, M2M, which has been under way for about 20 years, has become effective and reliable. The ability to transfer data between machines is a necessary, although not a sufficient, condition for the IoT. In essence M2M represents the backbone that supports it all.

For another thing, the development of internet protocol (IP) networking in automation systems has been an enabling event. Early factory automation systems generally consisted of one programmable logic controller (PLC) controlling one machine. The next evolutionary step was to enable PLCs across the factory floor to communicate with a central computer. This was initially done in a star topology, with each PLC connected to the computer via a separate cable. An important second step was the development of communication protocols such as Modbus that enabled a mesh topology instead of a star.

Think of this as the model for the IoT: it enabled all machines, sensors and controllers connected to the local area network to communicate with each other, with human-machine interfaces and with computers. These networks are still widely used on plant floors. Two obstacles in the way of the next stage, namely the IoT, is that almost all these networks are proprietary and many different ones exist. IHS’s Morelli lists no fewer than 25 different protocols, some more common than others. 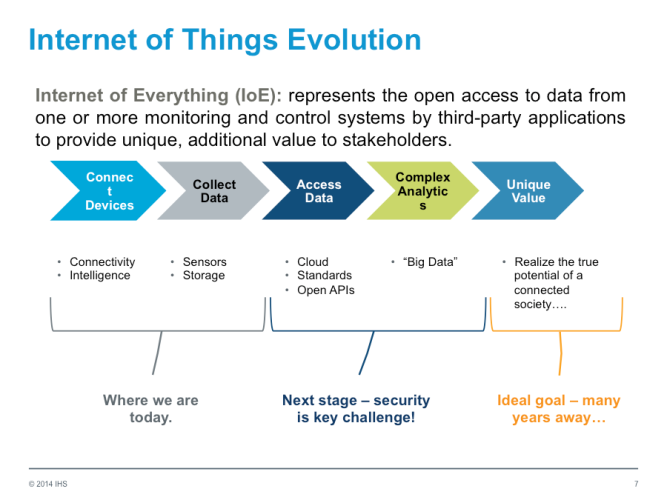 Evolutionary chain of the Internet of things. Source: Bill Morelli, IHS
This diversity is a problem that has to be solved in order to make IoT a reality. A number of solutions have been discussed, but no consensus has yet emerged. It is clear, however, that there has to be an intervening layer between the factory automation level and an IoT network. A good candidate would be industrial Ethernet.

Many devices, especially recently, have Ethernet ports. For those that do not, gateways are available that can interface most proprietary networks to Ethernet. An advantage of industrial Ethernet is its compatibility with the Ethernet networks that have become the de facto standard for office automation and data systems.

Ethernet can provide the infrastructure for one key function of the IoT: the transmission of real-time operating information from the “factory floor” to the “home office.” Conversely, management decisions based on that information can be sent to personnel and/or machines in the plant. This is a logical step, but it will require a culture change both for the managers of the industrial network and the IT managers who run the enterprise-level data networks. Stakeholders on both sides of this divide tend to want to see things the way they’re used to seeing things. It will take conscious effort to encourage them to learn each other’s needs and to work together.

As B&B’s Fahrion put it, “there’s almost a complete lack of integration between devices and enterprise systems." Ultimately, he says, "how you provision and manage devices becomes very important.”

The function of IoT is to widely distribute important information. This means that an inherent risk exists that the information can be tampered with by unauthorized people. Security is, therefore, a major issue in adopting the industrial Internet.

There are two key aspects to effective security: systems and people. Security protections will have to be designed into system software at every level, from individual devices up to the network layer. Protocols will have to be put in place for each use case, for example, defining what information can be shared with whom. Personnel also will have to be well trained in the use of security systems to avoid situations such as the person who sends an encryption key over unprotected e-mail.

Another important piece of the puzzle is converting data to information. As connected systems expand, the number of bits of data is growing astronomically. There are at least two ways of dealing with that. One is that edge devices such as sensors can now have embedded microprocessors that enable them to process data locally before it is sent to a network. These devices can be programmed, for example, to send vital trend information or high-priority alarms rather than data bits. Data can also be stored on cloud servers where it can be analyzed by advanced analytics software.

The IoT holds the potential to offer great benefits, despite all of these difficulties.

For one thing, machine sensors can send condition data (including temperature, pressure, and vibration) in order to predict problems in advance of actual equipment failure. This information could be shared with the device manufacturer who could provide standby replacement parts or offer service advice.

For another, process information could be used to identify areas where a revised manufacturing strategy could increase productivity and reduce energy costs. In this scenario, experts in different areas--for example, those with process knowledge, sensor experts, industrial networking specialists, and IT people--all would be able to view information in real time and discuss it with each other.

By monitoring similar machines, “the operational experiences of each machine can be aggregated into a single information system that accelerates learning across the machine portfolio in a way that is not possible with a single machine,” says the GE Industrial Internet report.

The GE report predicts that the IoT could boost annual productivity in the U.S. by 1–1.5%. It estimates that a 1% savings due to increased productivity in various sectors could translate into increased value in the range of $30-$90 billion over 15 years.

Ultimately, the goal for the Internet of Things is to take formerly siloed information and make it shareable.

“The first piece is being able to talk to machines and collect data from them, which you couldn’t do before," says IHS's Morelli. "The second piece is how do we share that data to maximize the value?”

Coming in Part 2: Organizational challenges with the IoT are addressed, including how it will be administered and by whom, and what the network and physical layers may look like.

By posting a comment you confirm that you have read and accept our Posting Rules and Terms of Use.
Advertisement
RELATED ARTICLES
Internet of Things Stimulates MEMS Market
How an IIoT system enables remote monitoring of factory processes
How the maritime industry is navigating the IoT and machine learning
Researchers propose an automated security assessment for the IoT
Mouser's Empowering Innovation Together Series: All Things IoT
Advertisement