Quantifying the benefits of US fuel economy standards

A trifecta of benefits has been realized since the Corporate Average Fuel Economy (CAFE) Standards were implemented in the U.S. in 1978. An assessment of historical data by Princeton University researchers shows that the policy cut greenhouse gas emissions, saved money for consumers and reduced national reliance on foreign oil supplies.

By requiring automakers to produce more efficient vehicles, the standards saved $5 trillion in fuel costs and prevented 14 billion metric tons of carbon from being released into the atmosphere. This reduction is 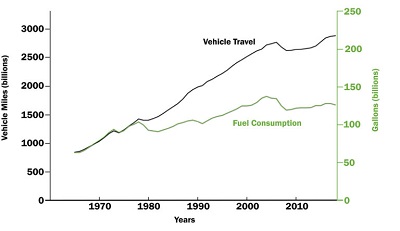 Fuel consumption has been reduced by almost two trillion gallons, and the CAFE Standards also contributed to holding the rate of yearly growth in gasoline usage to 0.2% since 1975. Fuel savings have exceeded the cost of enhancing fuel economy and traffic safety has improved as well.

The researchers underscore the need to continue to increase the stringency of the standards based on the best available data and analysis. Without such policies, there is little incentive for automakers to focus on fuel economy as opposed to horsepower or vehicle comfort. The standards have spurred technological innovation, allowing cars to provide another winning trifecta in terms of power, comfort and efficiency at a reasonable cost.