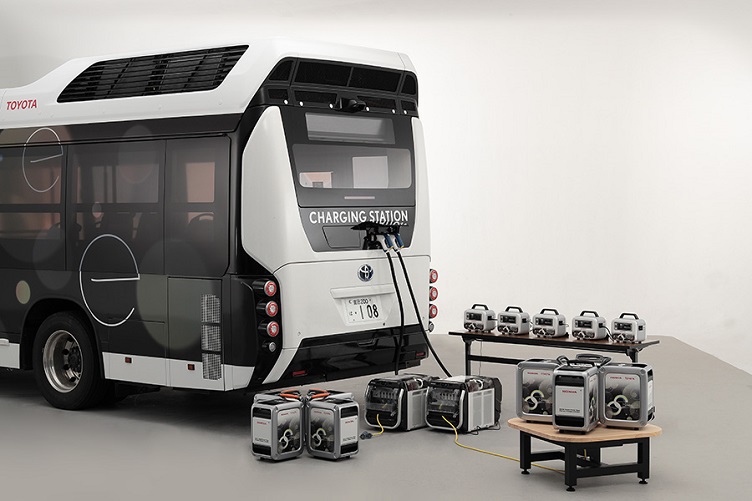 Moving e charging station is a mobile power generation vehicle that could help bring power to those in areas where the power grid is damaged due to disaster. Source: Toyota

Toyota Motor Corp. and Honda R&D Co. Ltd. are collaborating on a mobile power generation/output system to deliver a secure supply of electricity in times of disaster.

The system, called Moving e, consists of a fuel cell bus that can carry a large amount of hydrogen, portable external power output devices and portable batteries. The companies plan to use the system to deliver electricity anytime and anywhere the power grid is damaged after a disaster such as a typhoon, an earthquake, a hurricane or a rainstorm.

The Moving e system can be used as a “phase-free” system in times of disaster, supplying electricity in affected areas as well as for routine uses such as supplying power at an event.

The system will consist of:

The system would be loaded with the equipment and driven to a disaster site to supply electricity in those actual locations. Portable external power output devices and portable batteries will be used to take electricity out of the fuel cell bus using a power source and to feed electricity into electrical appliances.

The Moving e fuel cell bus is equipped with twice as many high-pressure hydrogen tanks, enabling it to feature a high-output and large-capacity power generation capacity about 454 kWh with a maximum output of 18 kW. During a power outage, the system could supply electricity in indoor areas such as an evacuation center as well as inside vehicles by storing electricity generated by the charging station in large-capacity portable batteries.

Honda and Toyota plan to test the system through various uses in municipalities and businesses that fulfill the conditions and are willing to cooperate in testing.

By posting a comment you confirm that you have read and accept our Posting Rules and Terms of Use.
Re: Toyota and Honda test mobile power generation system to help with disasters
#1

Accessibility of power generation using fuel cell during the disaster time is difficult due to its weight.