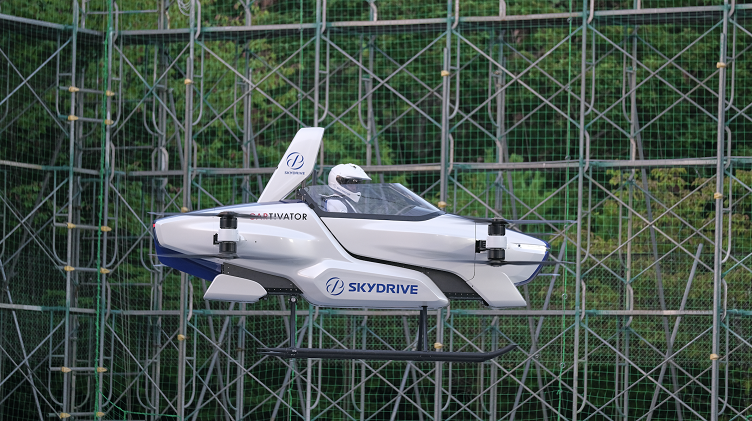 SkyDrive conducted what it claims is the first manned flight in Japan in a one-seat flying car that the company hopes will help with traffic congestion of the future. Source: SkyDrive

Flying car startup SkyDrive Inc. has completed what it claims is the first manned flight in Japan using its SD-03 flying car model.

The public demonstration took place at the 10,000 square meter Toyota Test Field where it took off in the early evening and circled the field for about four minutes. The single-seat flying car was piloted but a computer-assisted control system helped ensure flight stability and safety while staff monitored flight conditions and aircraft performance.

The SD-03 flying car is designed to be a small electric vertical take-off and landing (eVTOL) model that measures 2 m x 4 m x 4 m, taking up the same space as two parked cars. The electric motors drive rotors that are deployed in four locations — each location houses two rotors that rotate individually in opposite directions, driven by its own motor. The eight motors are a redundant safety system so that if something goes wrong during flight, another motor can take over.

The company’s goal is for the aircraft to become a new means of transportation in the sky rather than adding to an already crowded transportation situation on the ground.

SkyDrive plans to conduct test flights in the future to improve technologies and fully comply with safety provisions of the Civil Aeronautics Act. Based on the results of the SD-03 testing, it aims to obtain approval for flights outside the limits of the Toyota Test field before the end of 2020.