Mitsubishi Heavy Industry (MHI) has received orders to build two next-generation liquified natural gas (LNG) carriers. The ships will be used to transport shale gas produced primarily in North America at the Freeport LNG Project. The two vessels will be built at Mitsubishi’s Nagasaki Shipyard & Machinery and are scheduled for completion and delivery in 2018. 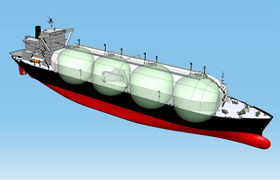 The North American LNG export facility is being developed by Freeport LNG Development L.P. on the U.S. Gulf Coast. The facility includes a natural gas liquefaction facility to refine and liquify shale gas and other natural gases produced in the U.S. at a rate of up to 13.2 million tons per year. Production is expected to begin in 2018.

The two LNG carriers will be of MHI's Sayaringo Steam Turbine and Gas Engines (STaGE) design, which MHI says features a more efficient hull structure and hybrid propulsion system that offers improved LNG carrying capacity and fuel efficiency. The ships will measure 297.5 meters in overall length, 48.94 meters wide, 27 meters in height and have a draft of 11.5 meters. The vessels' width will allow for passage through the newly expanding Panama Canal.

Each carrier will include four apple-shaped tanks with a total holding capacity of 180,000 cubic meters. The tank cover will be integrated with the hull structure, a feature that Mitsubishi says enables a lighter vessel while retaining overall structural strength and reducing wind resistance.

The latest orders follow an order for two Sayaringo STaGE LNG carriers in April and in January, all expected to carry LNG from North American facilities.

Crude Oil Market Turmoil Could Mean “Back to the Future” Experience for Petrochemicals, IHS Says