The versatility of laser cutting: From large-scale manufacturing to small shops

For manufacturing shops and fabricators, investing in a laser machine is one way to diversify into new processes, clients or markets. A well-designed laser machine can cut, mark and engrave materials, and can help create products ranging from custom engraved gifts in a makerspace to rapid prototypes and sheets of burr-free cut metal parts.

While laser cutting and laser engraving are different processes, they can both be performed using a single laser machine. In other words, most laser machines can both cut and engrave materials, which lends them their trademark versatility.

It is important to remember that most laser machines are geared toward one process or the other, however. Machines described as laser cutters are often larger and have higher-powered lasers, while those specialized in engraving are often smaller and focused more on processing speed than laser power. Again, despite these differences, most machines can be used for both processes, but may be less efficient for the process opposite their design characteristics.

Laser machines typically use one of several laser technologies. CO2 laser machines are versatile and affordable, costing significantly less than other laser systems. They utilize a gas laser in which CO2 gas is excited by DC electrical energy, producing a beam of light in the far infrared region of the electromagnetic spectrum. This wavelength is efficiently absorbed by a wide range of materials, allowing CO2 laser machines to effectively mark and cut a large assortment of substances, from plastic, rubber and fabric to glass, tile and wood.

Dual-source laser machines combine a CO2 laser and a fiber laser to create a more versatile machine. The laser source can be switched mid-job to mark or cut differing materials.

The most obvious applications for laser machines are cutting flat sheets for laser cutters or marking metals for packaging materials with logos or tracking information for engravers. But a laser machine’s versatility means it can be applied to many other uses within a manufacturing operation.

Rapid prototyping is one example. This process often employs additive manufacturing and 3D printing, but laser cutting can often replace or augment 3D printing. Hybrid machines using multiple lasers can cut a huge variety of materials, many of which cannot be produced by 3D printing. Depending on the materials needed for prototyping, using a 3D printer for complex three-dimensional parts like hardware and mounts in conjunction with a laser cutter for flatter geometries can save time and cost. 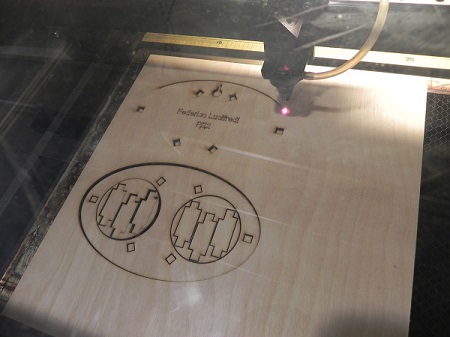 Printed circuit board (PCB) manufacturing is another ideal application. Prefabricated PCBs can be cut and marked with necessary codes, and copper layers on the board can be exposed, all by using a single laser machine. In the medical space, laser marking can complement laser welding when producing pacemakers, surgical blades, dental tools and more.

New hybrid laser machine designs are making the already versatile device even better. Machines combining multiple lasers and various degrees of automation can switch between cutting a 1 in thick steel sheet and a thin steel tube within minutes, for example, with no operator intervention.

Late last month, SME reported that Illinois-based manufacturer Bystronic completed a demo of automated laser manufacturing at its headquarters, complete with two high-power fiber lasers, an extensive materials library and automated parts sorters and bending systems. The company touts its modular solutions that can revolutionize a production floor but allow a manufacturer to integrate its older equipment rather than sell it to upgrade to an automated system. These hybrid and automated systems represent some of the most fully realized implementations of the Industry 4.0 concept.

The portability and versatility of laser cutters also proves useful in makerspaces and smaller shops. Because they can perform similar tasks as a 3D printer, laser machines make excellent replacements for 3D printers or complementary technologies to a makerspace that already owns a printer.

A self-employed tradesperson can open up dozens of possible business ventures by purchasing a small laser machine. Aside from these typical uses, a laser machine can also be useful in some niche businesses.

A funeral home director could invest in a laser machine and engrave tombstones in-house rather than via a contractor, for example. Because laser machines can engrave leather, an engraving business could find a lucrative niche focusing on customizing leather products or book covers.

Laser machines are some of the most versatile single devices in a manufacturing operation, suitable for a range of processes and compatible with many materials. Add in modern automation, and there is a glimpse of a potential factory of the future.

By posting a comment you confirm that you have read and accept our Posting Rules and Terms of Use.
Advertisement
RELATED ARTICLES
What to consider when buying your first laser cutter or engraver
Flexible and Affordable Laser Engraving
Bring Your Creative Visions to Life with Epilog Laser!
Finding middle ground: Epilog Fusion Edge
Laser Cutting Acrylic Displays
Advertisement