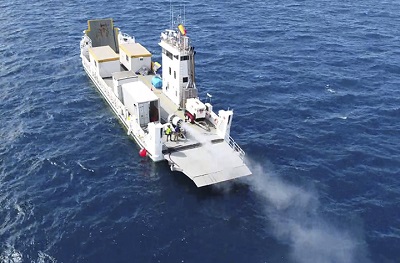 This coral ecosystem has experienced its third major bleaching event in the last five years, brought on by rising marine water temperatures. The thermal stress causes the corals to expel the algae on which they rely for nutrients and coloration and could lead to permanent damage. Cooling the surrounding waters by cloud brightening – induced by a type of cloud seeding process – can alleviate these detrimental conditions.

Cloud-seeding turbines were tested 100 km off the Queensland coast, spraying sea water droplets into the air that evaporate to form nanoscale sea salt crystals. These atmospheric particles function as cloud condensation nuclei that brighten existing clouds and enhance their reflectivity, in effect deflecting solar energy away from the reef ecosystem.

The barge-mounted cloud brightening equipment was accompanied by a second vessel equipped with air sampling instruments, including drones. The project confirmed the generation of hundreds of trillion of cloud reflectivity-boosting sea salt crystals per second.

The researchers from Sydney Institute of Marine Science, Southern Cross University, University of Sydney and Queensland University of Technology hope to test the technology on a larger patch of reef by brightening clouds across a 20 km x 20 km area.

By posting a comment you confirm that you have read and accept our Posting Rules and Terms of Use.
Re: Watch: Brightening clouds to conserve the Great Coral Reef
#1

Well It's good form to present the cloud to conserve the great reef article. Do you really need to fine it again in the future ?

Re: Watch: Brightening clouds to conserve the Great Coral Reef
#2

Intentionally directing high-flying aircraft to altitudes where they will form contrails over the reefs would accomplish much the same thing.