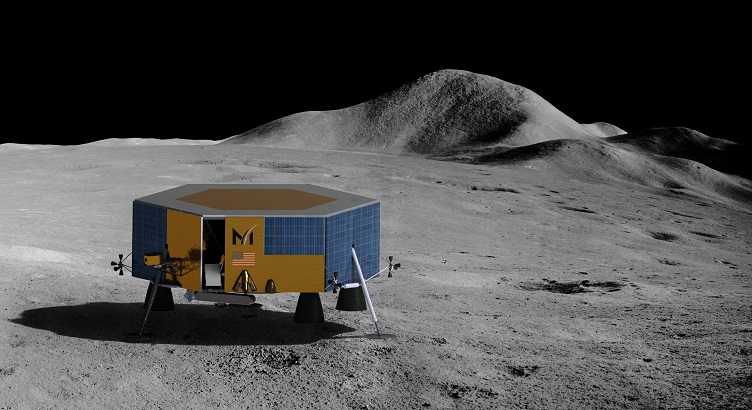 An artist's rendering of the Masten Lunar Lander that will carry scientific instruments to the Moon. Source: NASA

NASA will deliver and operate eight payloads to the Moon’s South Pole in 2022 to help begin a foundation for human expeditions to the lunar surface beginning in 2024.

Masten Space Systems will deliver the payloads, which will include nine science and technology instruments. The payloads will be delivered under NASA’s Commercial Lunar Payload Services (CLPS) initiative as part of the agency’s Artemis program.

“Under our Artemis program, we are going to the Moon with all of America,” said Jim Bridenstine, administrator of NASA. “Commercial industry is critical to making our vision for lunar exploration a reality. The science and technology we are sending to the lunar surface ahead of our crewed missions will help us understand the lunar environment better than we ever have before.”

Masten was awarded $75.9 million for the delivery of the instruments including payload integration, launch from Earth, landing on the moon’s surface and operation for at least 12 days. The payloads will be landed on the moon with Masten’s XL-1 lander.

The nine instruments that are to be delivered include:

Under the Artemis program, early deliveries of payloads to the lunar surface will allow NASA to perform science experiments and to test technologies prior to the return of human missions.

Re: NASA to deliver nine instruments to the moon as foundation for future missions
#1

The United States doesn't have the hardware to lift its own astronauts into low Earth orbit...

Nor does United States have the engineers with the institutional memory who can send astronauts to the Moon and return them safely to Earth...they are all either long-retired or have gone on to that great Mission Control Room in the sky.

Re: NASA to deliver nine instruments to the moon as foundation for future missions
#2
In reply to #1
JRiversW

It's worth noting as well that a major company with history of putting humans on the moon and contracts to put humans in space - Boeing - is not faring well in that effort. Once again it a problem with software.

Spacex is close with the crew dragon and may fly humans yet this year.

Re: NASA to deliver nine instruments to the moon as foundation for future missions
#3
In reply to #2
Lonewolf

Boeing has lost its way... It's current problems with its manned spacecraft program and its 737 Max jetliner has demonstrated that Boeing can't write software.

/Back To The Future