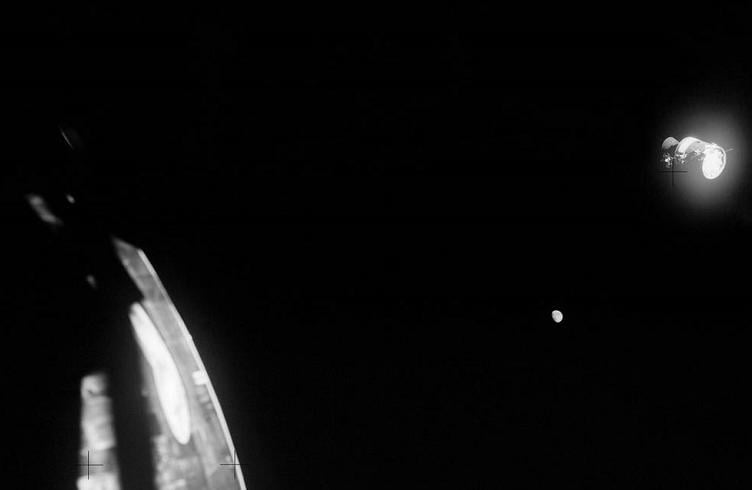 This view of the severely damaged Apollo 13 service module was photographed from the lunar module after it was jettisoned. The command module, still docked with the Lunar Module, is in the foreground. An entire panel on the service module was blown away by the apparent explosion of oxygen tank number two located in Sector 4. Three fuel cells, two oxygen tanks and two hydrogen tanks were located in Sector 4. The damaged area is forward (above) the S-Band high gain antenna. Credit: NASA

Fifty years ago the world collectively held its breath as NASA engineers and contract workers confronted and resolved seemingly insurmountable challenges in a desperate effort to bring three astronauts safely back to earth after their moon-bound Apollo 13 spaceship was damaged by an explosion two days after launch and 200,000 miles from home.

The accident was retold in a 1995 film starring Tom Hanks, and left at least two phrases (or reasonable facsimiles) embedded in popular culture: "Houston, we have a problem" and "Failure is not an option." 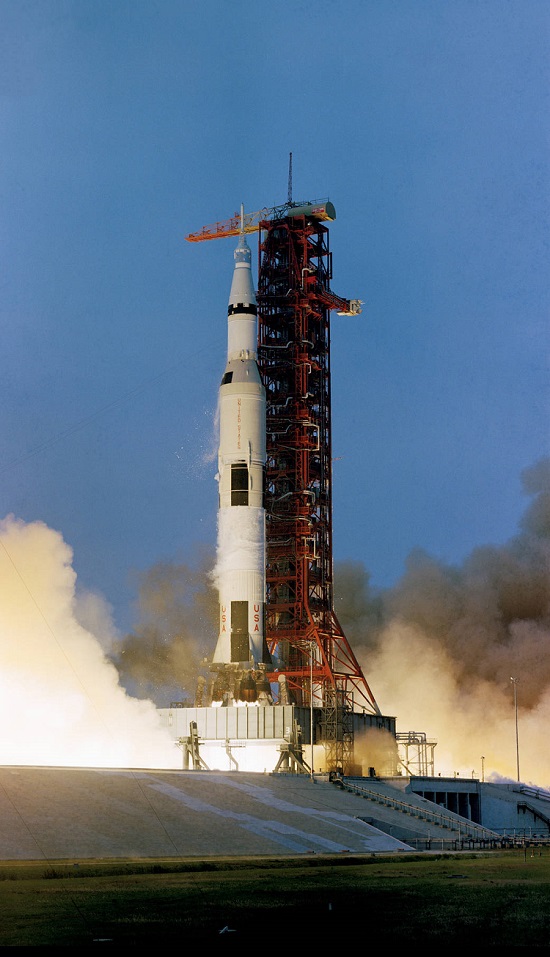 On April 11, 1970, Apollo 13 lifted off for the moon with Commander Jim Lovell, Command Module Pilot Jack Swigert and Lunar Module Pilot Fred Haise aboard. Two days later, with the spacecraft well on its way to the moon, an oxygen tank exploded, scrubbing the lunar landing and putting the crew in jeopardy. Credit: NASA(You can fact-check the entire mission here at the Apollo 13 in Real Time web site. The site includes Mission Control film footage, on-board television and film footage, 144 hours of space-to-ground audio, on-board recorder audio, press conferences as they happened and more than 600 photographs.)

The Apollo 13 mission tested engineering innovation and ingenuity in a high-stakes, highly visible setting. At least three engineering triumphs resulted in saving the three astronauts, Jim Lovell, Jack Swigert and Fred Haise: Turning the lunar landing craft into a lifeboat when the Command Module's life support systems were severely compromised by the explosion, re-powering the Command Module from near black start after NASA controllers ordered systems to be shut down to conserve battery power, and jury-rigging a carbon dioxide removal system that proved critical to the crew's survival.

As NASA tells the story, at 55 hours 46 minutes into the mission, the crew finished a TV broadcast and finished a few tasks before their planned sleep period. One task involved turning on an electrical system in the spacecraft's service module to stir a liquid oxygen tank.

Oxygen tank No. 2 blew up, causing the No. 1 tank also to fail. The Command Module's on-board supply of electricity, light and water was lost, and the astronauts were about 200,000 miles from Earth and headed toward their planned rendezvous with the moon.

A post-accident investigation found the root cause of the explosion. Five years before the Apollo 13 flight, in 1965, the Command Module had undergone a number of design changes that included raising the permissible voltage to the heaters in the oxygen tanks from 28 to 65 volts DC. However, the thermostatic switches on the heaters weren't also modified to suit the change. 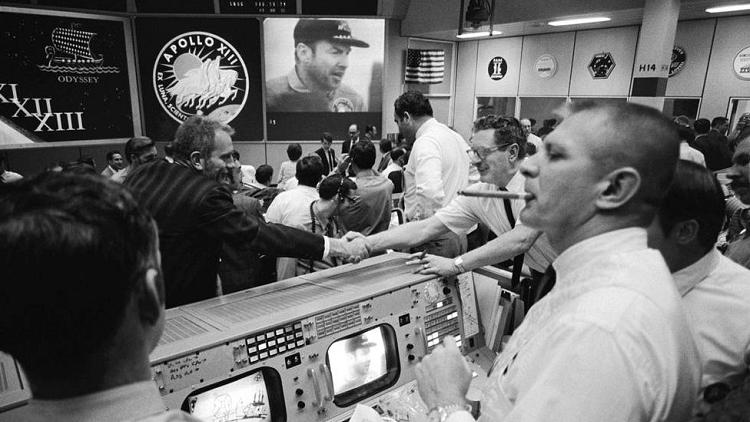 Deke Slayton (in dark jacket, left of center) director of flight crew operations, and Chester M. Lee shake hands in Mission Control at the successful end of the Apollo 13 flight on April 17, 1970. Flight Director Gene Kranz celebrates with a cigar. Astronaut Jim Lovell is on the television screen at the rear of the room. Credit: NASAThe No. 2 oxygen tank, identified as serial number 10024X-TA0009, had been previously installed in the service module of Apollo 10, but was removed for modification and damaged in the process. The tank was fixed, tested at the factory, installed in the Apollo 13 service module and tested again during a Countdown Demonstration Test at NASA's Kennedy Space Center beginning March 16, 1970.

As part of the test, the tanks were to have been emptied to about half full. The No. 1 tank was emptied successfully, but No. 2 dropped to only around 92% of capacity. Gaseous oxygen at 80 pounds per square inch was applied through a vent line to expel the liquid oxygen, but that failed. An interim discrepancy report was written, and on March 27, two weeks before launch, detanking operations resumed.

No. 1 again emptied normally, but No. 2 did not. After a conference with the contractor and NASA personnel, the test director decided to "boil off" the remaining oxygen in No. 2 by using an electrical heater within the tank. The technique worked, but it took eight hours of 65-volt DC power to dissipate the oxygen. Due to the failure to replace an underrated component during the 1965 design modification, the boil-off procedure turned out to severely damage the tank's internal heating elements.

The tank, now damaged from eight hours of overheating, was a potential bomb the next time it was filled with oxygen. That bomb went off in the form of a sharp bang and vibration that rocked the Apollo 13 space ship at 9:08 p.m. Houston time on April 13. Astronaut Jack Swigert saw a warning light that accompanied the bang and said, "Houston, we've had a problem here."

The explosion caused a rapid degradation of critical systems in the Command Module, leading the astronaut crew and ground controllers to reach the conclusion almost simultaneously that the lunar landing craft would need to be used as a lifeboat. The race was on for ground controllers to write and test completely new procedures before passing them along to the crew. 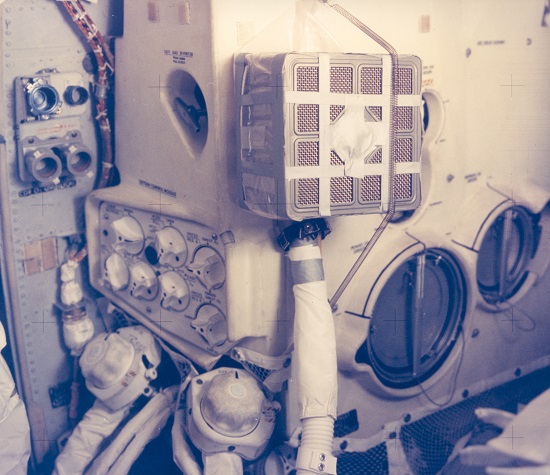 An interior view of the Apollo 13 Lunar Module and the jury-rigged carbon dioxide removal system, which the Apollo 13 astronauts built in order to use the Command Module lithium hydroxide canisters to purge carbon dioxide from the Lunar Module. This arrangement was rigged using the canisters from the Command Module. Credit: NASAWith around 15 minutes of power left in the command module, Haise and Lovell made their way to the lunar landing craft, leaving Swigert to perform system shutdown chores in the command module. One concern was to determine if there were enough consumables to get home. The lunar module was built for a 45-hour lifetime and it needed to stretch to 90.

Electrical power was another concern. There were 2,181 ampere-hours in the lunar module batteries. Ground controllers worked out a procedure where the command module batteries could be charged with that power. All noncritical systems were turned off and energy consumption was reduced.

A life-threatening buildup of carbon dioxide led to perhaps the cleverest engineering solution of the entire mission.

After a day and a half in the lunar module lifeboat, a warning light showed that carbon dioxide had built up to a dangerous level. The challenge was for mission control engineers to rapidly devise a way for the astronauts to attach the command module canisters to the lunar module system using only material carried on board. The solution included plastic bags, cardboard and tape. 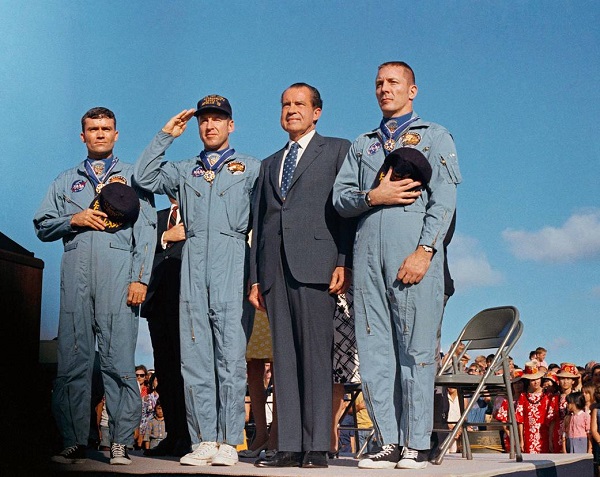 resident Richard M. Nixon and the Apollo 13 crew salute the U.S. flag during the post-mission ceremonies at Hickam Air Force Base, Hawaii. Earlier, the astronauts Fred Haise, Jim Lovell and Jack Swigert were presented the Presidential Medal of Freedom The makeshift system worked and carbon dioxide levels remained manageable for the rest of the flight, which ended with a successful return to Earth on April 17, 1970.

If the Apollo 11 mission of July 1969 was a triumph of engineering planning and execution at is best, then the Apollo 13 rescue mission nine months later is an equally notable engineering achievement made necessary due to unexpected system failures and high-stakes improvisation.

As Spaceship Earth faces COVID-19 and its daunting engineering and logistical challenges, the flight 50 years ago of Apollo 13 can offer encouragement that existential challenges can be addressed and overcome. Now, as then, the phrase attributed to Flight Director Gene Kranz comes to mind: Failure is not an option.

The feature film "Apollo 13" that embraces this story is highly recommended viewing.

Our Apollo manned space program had the best collaborating engineers in the world working during the Apollo 13 rescue operation. Bravo.