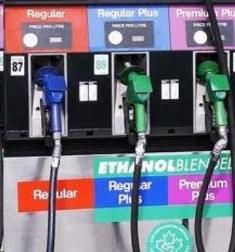 Gas pump filling nozzles. Source: Wikipedia.comResearchers from the University of Michigan Transportation Research Institute say that on-road fuel economy for all vehicles has improved by less than a mile per gallon (mpg) in the last 25 years—partly because it takes many years to turn over the fleet.

In an update to a research conducted six years ago, researchers Michael Sivak and Brandon Schoettle say that on-road fuel economy for the entire fleet of vehicles has improved from 16.9 mpg in 1991 to 17.6 mpg in 2013.

The study analyzed the annual changes in actual fuel economy of vehicles on U.S. roads from 1923 to 2013, by using information about distances driven and fuel consumed to calculate fuel economy of the overall fleet and of different classes of vehicles.

"After the 1973 oil embargo, vehicle manufacturers achieved major improvements in the on-road fuel economy of vehicles," says Sivak, a research professor. "However, the slope of the improvement has decreased substantially since 1991."

By posting a comment you confirm that you have read and accept our Posting Rules and Terms of Use.
Advertisement
RELATED ARTICLES
Auto Industry on Pace to Beat 2020 Fuel Efficiency Standards, Report Says
Crossover Utility Vehicle Sales Are Edging Out Cars
Taking the Drag Out of Truck Fuel Economy
AI Predicts Fleet Fuel Economy and Emissions
The drive to cleaner urban air includes hybrid electric vehicles
Advertisement