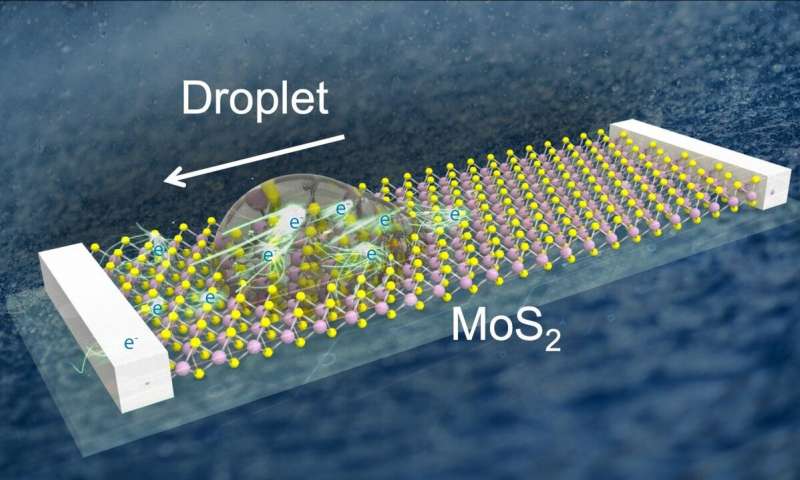 A droplet moving on MoS2 generates the voltage as high as 5 V. Source: Adha Sukma AjiResearchers from Japan’s Nagoya University and Kyushu University have developed a device for harvesting energy from the movement of just one droplet of water to produce more than 5 volts of electricity.

The device, which is composed of a series of flexible thin films, produces electricity from droplets of water that slide from the device’s upper surface, borrowing from the principles of energy harvesting, transforming naturally occurring energy derived from light, vibration and heat into electricity. Such energy, researchers believe, will potentially power future internet of things (IoT) devices

To accomplish this, the team used molybdenum disulfide (MoS2) as the active material in the generator. The team formed a large, single layer of MoS2 on plastic film through chemical vapor deposition using a combination of a sapphire substrate along with molybdenum oxide (MoO3) and sulfur powders. Polystyrene film was also incorporated as bearing material for the film, transferring the MoS2 film to the plastic film’s surface.

The result was a generator flexible enough for use in plumbing applications, and to power IoT devices such as acid rain monitors and self-powered rain gauges and water quality sensors that simultaneously monitor industrial wastewater while generating power from it.

The research appears in the journal Nano Energy.

By posting a comment you confirm that you have read and accept our Posting Rules and Terms of Use.
Advertisement
RELATED ARTICLES
Desalination Material Filters 70% More Water Than Graphene
Technique Offers a Promising Future for Hydrogen Fuel
Decontaminating water with an inexpensive new material
Electricity Is Generated from Salt, Water and a Membrane
Team develops thin solar heating film for efficient thermal energy harvesting
Advertisement