Crude Oil Market Turmoil Could Mean “Back to the Future” Experience for Petrochemicals, IHS Says 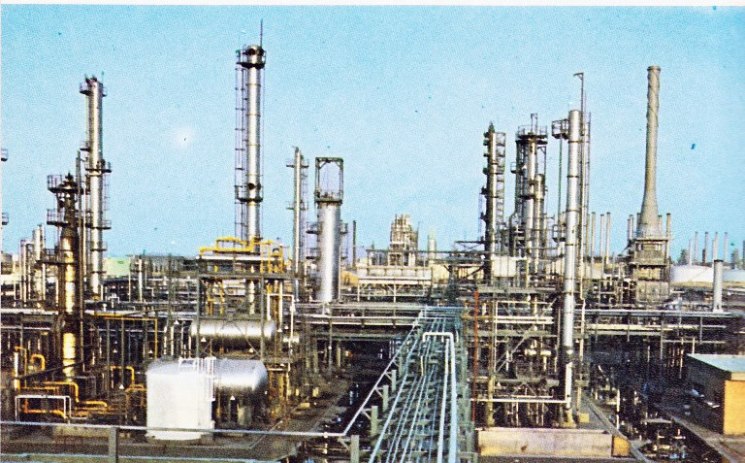 An extended recovery period for crude oil prices, exceeding five years, would have dramatic implications for the global petrochemical industry and could mean a “Back to the Future” experience for some companies and regions -- creating a more competitive environment for naphtha producers, according to a new IHS report.

The IHS Chemical Crude Oil Turmoil and the Global Impact on Petrochemicals Special Report assesses the potential market and economic implications of three possible, short-, medium-, and long-term recovery trajectories for crude oil prices to help petrochemical producers address their investment planning in the midst of significant market volatility, and a higher degree of uncertainty regarding the role of OPEC in managing the global supply of crude oil.

“Oil price volatility is creating a nightmare for companies planning investments,” says Don Bari, vice president, technology and analytics - IHS Chemical, and an author of the report. “The long-term recovery case, should it come to fruition, has the most significant implications for the market.

Because oil dynamics drive marginal production cost and price-setting mechanisms for many chemicals, plastics and fibers, a prolonged oil-price recovery could shift the feedstock advantage from ethane and back to a more cost-competitive naphtha. Much like the DeLorean time machine from the 1985 film "Back to the Future," naphtha would be the conduit taking us ‘back to the future,’ similar to the industry experience of the late 1980s.”

In the case of a long-term oil price recovery (exceeding five years), IHS economists would expect moderate economic growth to continue for several years, along with slower oil demand growth. At the same time, technology would continue to reduce oil production costs and increase supply, even at lower oil prices. Long-term, continued global oversupply of crude oil could keep prices from recovering to trend for more than 10 years, the IHS report says. 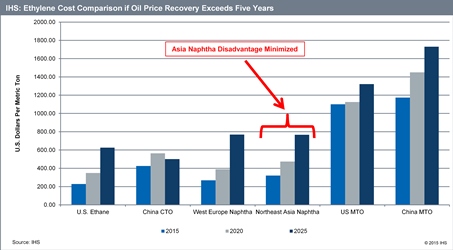 Ethylene cost comparison is oil price recovery exceeds 5 years. Source: IHSThe outlook resulting in a longer-term oil price recovery is not particularly rosy, and the short-term view is also complex. In the near-term, energy experts at IHS say economic and geopolitical risks continue to challenge oversupplied oil markets, and crude oil prices are posed to drop further.
In an IHS Energy research note on crude oil production and prices issued in late July, researchers say that since the oil price collapse, global oil production has gone up, not down. Indeed, since the fateful Nov. 27, 2014 OPEC meeting, aggregate production from the United States, Saudi Arabia, and Iraq has increased by 2 million barrels per day—far more than global demand. Oil markets are increasingly glutted.

Last November is also when the United States inadvertently became the swing oil producer. Prices have not yet fallen far enough or for long enough for an appreciable U.S. supply adjustment to occur. But it may not be far off, especially if oil prices fall further with additional Iranian supplies. Oil prices will be under downward pressure until there is evidence the glut is shrinking. This will not happen quickly unless prices fall even further from recent levels.

Impacts of a Price Recovery

As for petrochemicals, the first major impact of a long-term oil price recovery, Bari says, would be on natural gas liquids (NGLs) production and ethylene production in the U.S., where prolonged lower oil prices would slow NGLs production and ethane cracker capacity expansions, potentially creating a tight market. Ethylene is the basic building block for many downstream chemicals, plastics and synthetic fibers, and as such, is the largest volume, and perhaps most market-indicative petrochemical. A tighter ethylene market would not only push operating rates higher, but would also cause prices to increase and introduce more market volatility.

A second macro trend would be seen in Europe and Asia. With naphtha back in economic favor as a cost-competitive feedstock, the regions’ petrochemical producers would be the winners, with their naphtha crackers running at high rates, and margins back in positive territory. In response, more naphtha-based crackers would be built in China, and other emerging countries building a petrochemical base.

Since more ethylene production from naphtha yields more co-production of propylene and butadiene, global on-purpose producers of propylene would see their profits erode quickly as conventional production is able to meet market demand reducing the need for higher-cost production options.

“One of the most intriguing revelations from our IHS long-term price recovery analysis was the impact on the plastics industry, particularly plastics demand and the implications for plastics recycling,” Bari says. “We found that low oil prices stimulate demand for virgin plastics by reducing economic incentives to recycle plastics. As less plastic is recycled, demand for ethylene further increases, which leads to more co-product production of propylene and butadiene.”

A prolonged oil price recovery would also dramatically impact future investment plans as chemical producers adjust to the shifting feedstock dynamics. In North America, U.S. ethane would remain “stranded,” and advantaged in the long-term as oil prices cycle and necessary LNG and ethane export and shipping infrastructure is added, says IHS, which also covers the global shipping trade through IHS Maritime. China coal, however, is an inland “stranded” feedstock, and in a long-term recovery case, coal and methanol routes would lose most of their advantage, as low oil prices will keep naphtha prices depressed, and coal prices are already near breakeven levels needed to overcome high investment costs. The tighter spread between oil and coal would cause coal-based petrochemical investments to lose favor in China.

As for the methanol value chain, in a long-term recovery case, methanol projects with advantaged feedstocks, such as in North America and the Middle East, would fare better than higher-cost, coal-based units in China. Methanol projects targeting energy applications, such as gasoline and DME, would also be the losers in this outcome, along with North American methanol projects targeting methanol-to-olefins (MTO) and methanol-to-propylene (MTP). While methanol capacity additions will still occur in locations with advantaged feedstocks, the speed of these additions would be significantly delayed and rationalizations also would be likely.

A long-term oil price recovery would also have a profound impact on both global polyethylene and polypropylene markets. In this case, said IHS, polyethylene production rates would grow as global demand expands by more than 54 MMT during the study period 2014 to 2025, due to a higher GDP, better price competitiveness displacing conventional materials such as metal, paper and glass, and the aforementioned replacement of recycled material by virgin material. Western Europe and Asia would benefit greatly from more competitive feedstock and buoyant demand, while North America would experience lower integrated margins.

A prolonged period of low oil prices would put new Russian polyethylene projects in jeopardy because of the poor investment climate, leaving Russia as a net–importer of the chemical. The changes in the global oil market due to persistent low prices would continue to impact regional capacity additions, creating significant implications for global petrochemical producers and maritime operations, the IHS report says.

The winners in this view would be European and Asian naphtha-based producers due to their conventional cracker investments. South American polyethylene projects also would move forward and additional Asian capacity would come online. North America would be the losers in this equation, the IHS report noted, since the North American export position would be negatively impacted as its economic advantage shrinks.

While the implications for the chlor-alkali and vinyls chains under the long-term oil price recovery are not as severe as for other chemicals, a low oil price through 2017 or later would likely drive a break-even point between acetylene-based polyvinyl chloride (PVC) and ethylene-based PVC. If this ratio between oil and coal is reached, IHS said, it may be an opportunity for Asian producers to develop more ethylene-based PVC. Under the long-term oil price recovery, IHS expects that North America ethylene-based PVC producer margins will shrink, whereas naphtha-based Western European PVC producers’ margins will improve.