The process to restart unit 1 of the Sendai nuclear power plant in Japan began August 11, marking the end of almost two years of the country's entire reactor fleet standing idle. The unit is expected to re-enter commercial operation early in September.

Kyushu Electric Power Co. says that at 10:30 am local time it began the start-up process by removing the control rods from the reactor core. The 890 MWe pressurized water reactor was expected to achieve criticality at around 11:00 pm, it said. Sendai 1 should begin supplying electricity to the grid again on August 14. Electrical output from the unit will then be gradually increased and, following performance tests, it is scheduled to resume commercial operation in early September. The news was reported by World Nuclear News. 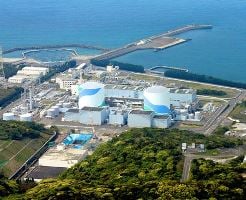 The 890 MWe Sendai Unit 1 pressurized water reactor was expected to begin supplying electricity to the grid on August 14.The two units at Sendai were taken offline for periodic inspections in May and September 2011, respectively. As with all of Japan's reactors, the restart of the units has been delayed until it has been confirmed they meet new safety standards introduced after the March 2011 accident at the Fukushima Daiichi plant. The restart of the Sendai units has been prioritised, in part due to local support in Kagoshima prefecture.

Kyushu submitted a joint application to the NRA in July 2013 for the necessary permissions to restart both units. These approvals include making changes to the reactor installations, its construction plan to strengthen the plant, and its operational safety programs for the units. In September 2014, the NRA gave the utility approval to make changes to the reactor installations at both units. That approval - which meant the NRA considered the two reactors, and the plant as a whole, to be safe for operation - represented by far the major part of the licensing process. Approval of the company's construction plan for unit 1 was given in March 2015, while that for unit 2 followed in May.

On 27 May, the NRA approved Kyushu's operational safety plans for the Sendai plant. These include emergency response plans in case of fire, flooding or other natural disasters, or a serious accident.

Loading of fuel into the core of Sendai 1 began on July 7 and was completed three days later. On July 27, the utility conducted an emergency response drill to check the procedures and the readiness of staff to cope with events at the plant that could lead to severe accident conditions.

Following the accident at Fukushima Daiichi, all of Japan's reactors were gradually taken offline for periodic inspections and safety checks. Unit 1 of the Ohi plant was the last to be taken offline in September 2013.

Twenty more reactors are currently progressing through the restart process, which is expected to gradually speed up after the first few units are back in normal operation. Unit 2 at the Sendai plant is expected to be restarted within a couple of months. The Japanese government envisages a return to using nuclear power for 20-22% of its electricity needs by 2030 as part of a plan to reduce carbon dioxide emissions by 26% compared to fiscal year 2013.

By posting a comment you confirm that you have read and accept our Posting Rules and Terms of Use.
Advertisement
RELATED ARTICLES
Second Japanese Nuclear Reactor Restarts
Japanese Nuclear Power Reactors to Be Retired
A Nuke Restarts as Japan Announces Its Long-term Energy Plan
Japanese Utility Opts not to Restart Two Nukes
As Japan restarts its nukes, LNG imports fall
Advertisement