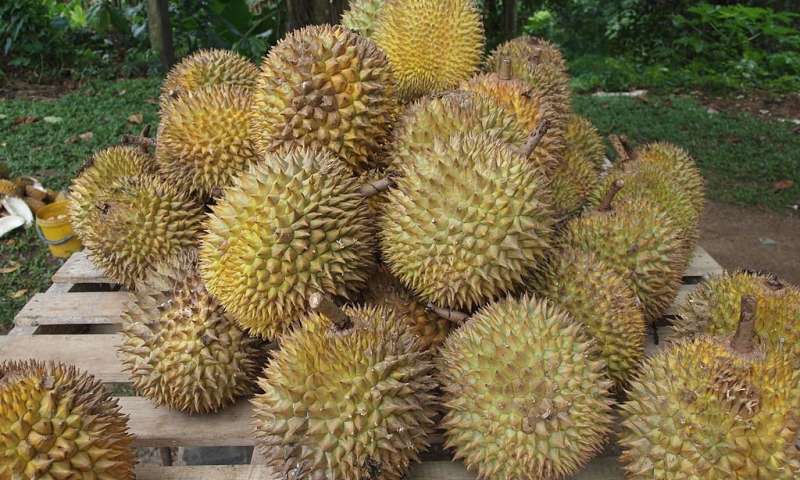 The Southeast Asian Durian fruit has a thick and pulpy exterior that when combined with epoxidized palm oil, reportedly transforms into a moldable, biodegradable polymer.

During testing, the researchers buried a prototype of the packaging in soil and recovered it three months later to discover that roughly 80% of the packaging had degraded. For scale, consumer plastic packaging can reportedly take hundreds of years to degrade.

In addition to food packaging applications, the team discovered that the material could also be used as 3D printing filament.

Durian fruit is just one of the unexpected ingredients being trialed as a plastic food packaging alternative amid an ongoing global plastic waste crisis. Researchers and innovators from every corner of the planet are exploring alternatives to plastic packaging, thereby keeping it from the world’s landfills and, eventually, the world’s oceans.

A researcher from Singapore’s Nanyang Technological University has created biodegradable food wrap composed of soybeans while a Canada-based startup is turning sawdust into plant-based plastic bottles. Meanwhile a London-based startup is transforming lobster shells into single-use plastic products while a team from New Zealand’s University of Canterbury are turning food waste into the building blocks for bioplastic.

By posting a comment you confirm that you have read and accept our Posting Rules and Terms of Use.
Advertisement
RELATED ARTICLES
Researchers using straw, grass and maize to develop biodegradable food packaging
Soybeans offer possible plastic film alternative
Grocery stores in Thailand using banana leaves to package produce
Eco-Friendly Food Packaging is On the Rise: Here's What You Need to Know
Biodegradable filament created for 3D printing
Advertisement