Work is set to begin in February on an eight-year process to dismantle the San Onofre Nuclear Generating Station in Southern California.

Work will include removing buildings, containment domes and other above-grade structures associated with Units 2 and 3, as well as partially removing offshore pipes that brought and discharged cooling water to the plant, and removing offshore buoys and anchors. 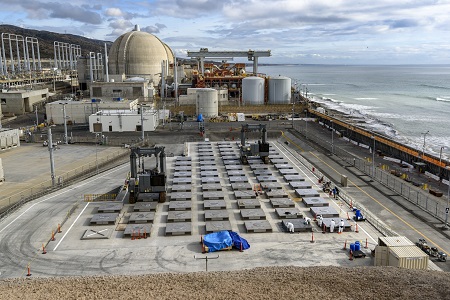 The utility recently sent residents within a rive-mile radius of the plant a 30-day notice of the start of deconstruction activities, currently expected to be no earlier than February 22.

The plant's first unit, Unit 1, operated from 1968 to 1992 and included a Westinghouse pressurized water reactor (PWR). Unit 2 was started in 1983 and Unit 3 started in 1984. Both used PWRs designed by General Electric-owned Combustion Engineering.

Upgrades designed to last 20 years were made to the reactor units in 2009 and 2010. Both reactors were shut down in January 2012 after premature wear was found on more than 3,000 tubes in replacement steam generators that had been installed in 2010 and 2011. The utility decided to close both units in 2013, citing uncertainty over their return to service.

Canister 46 as its transfer was under way. Credit: SCE

The utility said that during the download of one spent fuel canister, referred to as canister 46, workers encountered multiple signals indicating that the canister was not lowering properly into its storage cask.

A review determined that the canister’s three-inch thick stainless steel base was coming to rest on an interior shield ring. The load monitoring system provided an indication that there was contact with the shield ring, which led to the decision to pause the transfer process.

After adjustments were made, the canister was successfully lowered into its containment cask.

By posting a comment you confirm that you have read and accept our Posting Rules and Terms of Use.
Advertisement
RELATED ARTICLES
Video: Drilling a deep hole for nuclear waste storage
Canister designed for transfer of hotter used nuclear fuel
Greenlight for deep borehole disposal in these European states
Pilgrim closes and Crystal River looks to speedy decommissioning
Video: Green light for spent fuel repository in Sweden
Advertisement