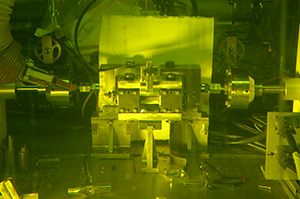 Moving rods of spent nuclear fuel (SNF) to interim storage or a geologic repository requires road or rail travel. Although a heavy shielding cask protects the rods, long-distance transportation subjects SNF to vibrations, sudden movements and other potentially agitating forces. To understand the effect, both the nuclear industry and its regulator need a reliable method of characterizing how well SNF will withstand the rigors of transportation.

A nuclear fuel rod consists of half-inch cylindrical pellets stacked in a strong metal tube known as cladding. As the heart of a fission reactor, these fuel rods can face corrosion, embrittlement and other radiation-induced damage. Even after fuel rods leave a reactor, high amounts of radioactivity remain within the nuclear pellets.

CIRFT’s creators focused on devising a standardized method of assessing spent fuel rod durability during transport. Undetected flaws in spent nuclear fuel can be exacerbated in transit; if the cladding has degraded enough, or if the vibration load is large enough, the vibrations could trigger a break in a fuel rod. That could present challenges if the SNF rods ever have to be removed from their canisters. These tests, or a “prediction protocol” using CIRFT technology, could help anticipate any cladding breaches as well as support new, improved transportation cask designs.

“Before this advance, nobody really knew how high–burn-up spent fuel would perform during extended transport under extensive jostling conditions,” says Wang.

CIRFT’s U-shaped design is crucial for reliable testing of hazardous materials. The two long arms of the device connect to electromagnetic motors that bend the rod sample in the targeted frequency cycles. Researchers measure the forces that represent the normal vibrations during transport with a combination of advanced displacement sensors and finite element analysis of the sample. The insight gained from these modeling measurements help ORNL’s scientists investigate potential points of deformation and stress in the cladding.

ORNL scientists discovered that SNF samples tend to degrade at the interfaces between adjacent pellets. This understanding of how vibrations affect the structure and behavior of used high–burn-up fuel rods is the first step in predicting fuel performance during transport.