Editor's Note: 2019 marked the 150th anniversary of work by Russian chemist Dmitri Mendeleev to develop what we know as the periodic table of the elements. Here are three of our favorite salutes that appeared during the year to mark that achievement. 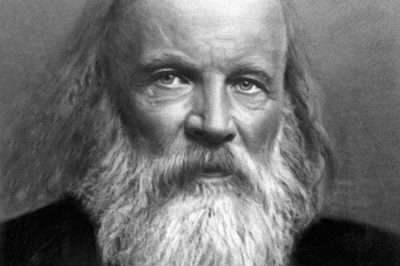 Dmitri MendeleevHistorians credit two decisions by Mendeleev with the worldwide recognition and acceptance his table has received. First, he left gaps in the table when it seemed that the corresponding element had not yet been discovered. He thus was the first to be recognized as using the trends in his periodic table to predict the properties of those missing elements, such as gallium and germanium. Second, occasionally he ignored the order suggested by the atomic weights and switched adjacent elements, such as tellurium and iodine, to better classify them into chemical families.

Idaho National Laboratory, part of the U.S. Department of Energy, created an interactive version of the famous table. The laboratory's contribution was based on research by its scientists as well as online sources.

The site Open Culture offered a link to a table of elements adapted by elements.wlonk.com. Its table not only identifies the elements, but also offers practical examples of how each is used in everyday objects.

Next, readers of a certain age will remember the humorist Tom Lehrer's sung homage to the elements, circa 1967. It's catchy and memorable, if not downright tongue-twisting.

Finally, the Energy Department's Lawrence Berkeley National Laboratory holds claim to the discovery of more than a dozen elements that are now part of Mendeleev's famous table. Science communications and media relations specialist Aliyah Kovner rewrote the classic poem "The Night Before Christmas" to offer a video tip of the hat to Mendeleev as his celebratory year draws to a close.

By posting a comment you confirm that you have read and accept our Posting Rules and Terms of Use.
Advertisement
RELATED ARTICLES
Check out this interactive periodic table, courtesy of Idaho National Labs
Musical Table Teaches Basics of Computer Programming
Replacing rare earths with common elements in electronics
Video: New Pu Compound May Aid Nuclear Waste Remediation
Why Are Certain Metals Rare or Precious?
Advertisement