Editor's note: This article has been updated to include portions of a statement from the company.

The U.S. Chemical Safety Board (CSB) released a factual update into the May 3, 2019, explosion and fire at AB Specialty Silicones facility in Waukegan, Illinois.

The update provides an incident timeline detailing the events that led up to the explosion and fire that fatally injured four workers and seriously injured another. The CSB said its investigation is ongoing and that a formal finding of cause will be released at a later date.

In a statement to Engineering360, the company said that "Since the accident, we’ve worked in full cooperation and transparency with the CSB, as we have with all other regulators, first responders, and law enforcement." It said that Engineering Systems Inc. conducted an independent investigation into the explosion's root cause, and determined the cause to be "human error that resulted in the mistaken addition of an erroneous ingredient." The company said in its statement that it provided that finding to the CSB and that it "looks forward to CSB’s more comprehensive work on the cause of the tragedy that has made such an impact on our AB family and our Waukegan community.”

The CSB said that at the time of the incident, the facility was manufacturing a product referred to as EM 652. The product is AB Specialty Silicone’s trade name for a silicon hydride emulsion that is used as a water repellent. Under certain conditions, both EM 652 and one of the raw materials used to make it, a compound called XL10, have the capability to produce hydrogen gas, which can be flammable.

On the day of the accident, plant operators were making back-to-back batches of EM 652. During the second shift, the initial batch was packaged into storage containers and an operator was beginning to produce a second batch.

Around 9:30 p.m., a few minutes before the incident, workers told the CSB that the operator making EM 652 began yelling, apparently concerned and frustrated by a problem developing in the EM 652 process. 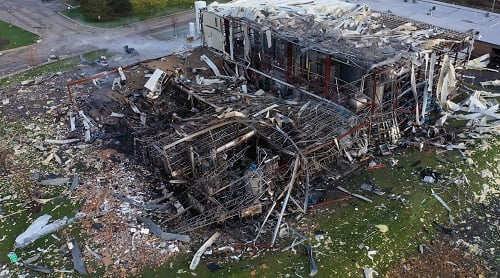 The May 2019 explosion killed four and injured one. Source: CSBThe activity captured the attention of a second operator and the shift supervisor. They both ran to where the EM 652 was being produced.

CSB interviews determined that by the time the second operator and the shift supervisor made it to the emulsions area, a tank making EM 652 was overflowing with foam. There, the operator said that he had just added the first two raw materials of the process into the tank, including XL 10.

While the operators and the shift supervisor were talking, the tank made a “very strange sound” and “erupted.” Witnesses described a hot and smoky scene as material overflowed from the tank and spilled onto the floor.

The CSB said that the shift supervisor told workers to ventilate the vapor from the building by turning on exhaust fans and opening the garage doors. But before an operator was able to turn on the fans, the building exploded, fatally injuring four people. The force from the explosion was felt up to 20 miles away and damaged surrounding businesses.

The CSB investigation team noted a number of details that the agency said are key to the ongoing analysis.

First, the instructions to make EM 652 warn of the dangers of the production of hydrogen gas when XL 10 is in contact with acids or bases.

Second, the EM 652 was made in a set of two atmospheric tanks that were loosely sealed. Workers would open the top of the tanks during the production process to, among other things, perform visual observations. The tanks had no engineered system to direct flammable gas, including hydrogen, to a safe location.

Third, the building ventilation system likely caused the flammable gas cloud to mix with air and disperse throughout the building.

Fourth, the CSB determined that there were no flammable gas detectors or hydrogen gas detectors with alarms to warn workers of the hazard. The generation of gas in the emulsions tank could produce foaming; however, the CSB said that foaming does not "normally occur" during this portion of the EM 652 process. The placement of the main air mover near the EM 652 process further increased the potential explosion danger from flammable gases generated in the emulsions area.

By posting a comment you confirm that you have read and accept our Posting Rules and Terms of Use.
Advertisement
RELATED ARTICLES
Ruptured pipe is focus of fatal chemical plant explosion probe
Design failures led to fatal chemical plant accident
Watch: Pipe corrosion seen as prime cause of refinery fire and explosions
Thermal fatigue led to gas plant fire and explosion, CSB says
Ammonia storage hazards and uses
Advertisement