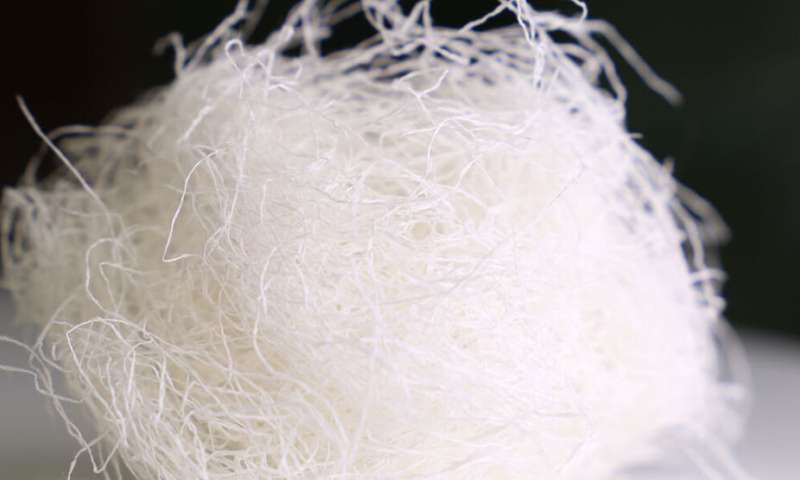 Source: VTTResearchers from Finland’s Aalto University and the VTT Technical Research Centre of Finland have created a yarn-like material that is capable of capturing pharmaceutical residues before they contaminate large bodies of water.

The yarn, which is composed of a wood-based cellulose fiber, is coated with a cyclic sugar that chemically binds to the yarn. The combination of yarn and sugar create pockets within the fiber that attract and capture hydrophobic pharmaceutical substances such as ethinylestradiol (EE2), which is a hormone commonly found in the birth control pill.

Researchers discovered during trials of the yarn that approximately 1 g of the yarn effectively captured roughly 2.5 mg of EE2.

The team envisions that the wood-based yarn would prove most effective at hospitals and in wastewater treatment plants, capturing pharmaceuticals before they can enter large bodies of water and affect the wildlife that resides there.

Notably, it has been reported that chemicals from human waste treatment plants traveling though rivers and streams have altered the behaviors of fish, where male fish have been demonstrating largely female behaviors such as laying eggs. This is thought to be associated with exposure to the hormones found in the birth control pill, called endocrine disruptors.

This is in addition to reports that UV filters from sunscreens and other personal care products as well as trace amounts of antidepressants are being found in fish populations all over the world.

Generally, activated sludge tanks are used to capture such substances at wastewater treatment plants, however, some substances manage to pass through the systems, thereby entering larger bodies of water.

The fiber designed to attempt to capture such problematic pharmaceutical substances is detailed in the journal Biomacromolecules.

By posting a comment you confirm that you have read and accept our Posting Rules and Terms of Use.
Advertisement
RELATED ARTICLES
Cellulose based resin creates biodegradable textiles, fibers, yarns and more
Suturing and sealing alternatives for the healthcare industry
A New Twist on Energy Harvesting
Video: Yellowcake Extracted from Seawater for the First Time
Researchers turning old clothes into new
Advertisement