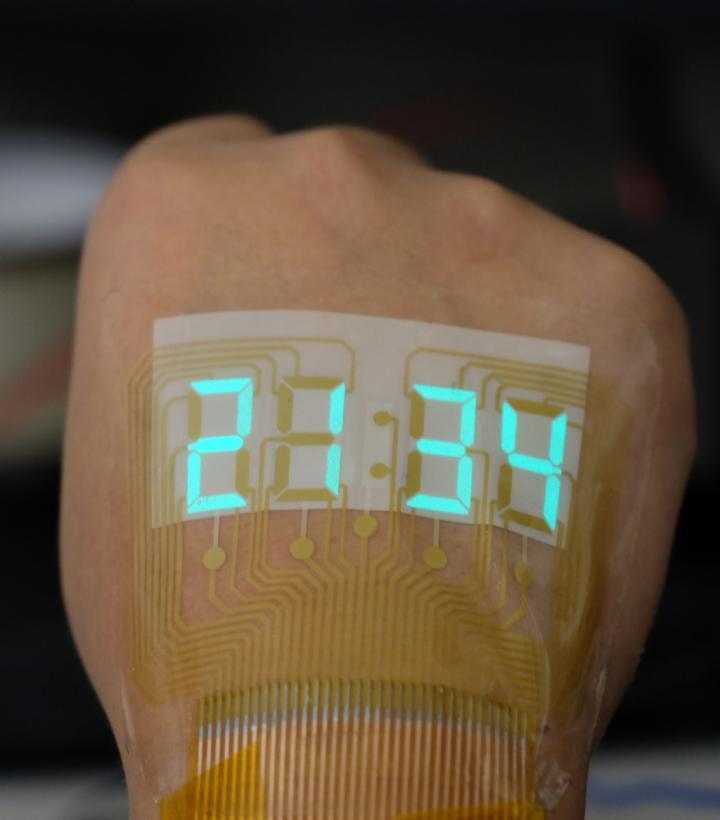 Source: Adapted from ACS Materials Letters 2019, DOI: 10.1021/acsmaterialslett.9b00376A team of researchers from Nanjing University in China has developed a stretchable light emitting adhesive display that is safe to use against human skin and that operates at low voltages.

The light emitting devices, called alternating current electroluminescent (ACEL) displays, are designed to adhere to human skin as well as to other surfaces, in place of bulky electronics such as smartphones or other devices.

To develop the ACEL, researchers placed an electroluminescent layer of light emitting ceramic nanoparticles, which were scattered throughout a rubbery polymer material, in between flexible silver nanowire electrodes. Reportedly, this composition increased the brightness of the ACEL display, eliminating the issue plaguing existing ACEL devices — specifically, that they tend to require high voltages to achieve appropriate display brightness, which presents safety concerns in terms of exposure to humans.

When testing the new material, the team, led by University of Nanjing professor Desheng Kong, discovered that when used to create a stopwatch display affixed to a volunteer’s hand, the display was sufficiently bright enough — even under indoor lighting and operating on low voltage.

The team envisions that the ACEL will find use cases in human-machine interface, soft robotics and smart wearable applications in the future.

The device is detailed in the American Chemical Society Materials Letters.