Robots will repair faulty welds at this nuclear power plant

French utility EDF said it will use remotely operated robots to repair 58 penetration welds at the Flamanville Unit 3 nuclear power plant,which is currently under construction in northern France.

In a June letter, the Nuclear Safety Authority (ASN) asked EDF to repair eight containment penetration welds that were found to be faulty. 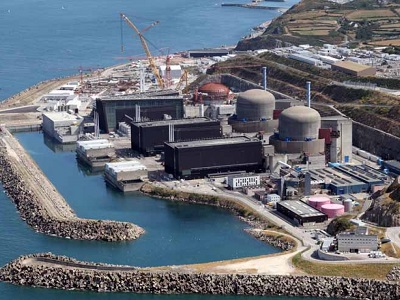 The three unit Flamanville nuclear power station in France. Credit: EDFThe penetration weld rework will send robots inside piping in the plant. A second alternative scenario, based on extracting piping and repairing it outside of the plant, remains as a fall-back approach, the utility said.

The repair pushes back the date of fuel loading at Flamanville Unit 3 to the end 2022 and raises the construction cost estimate for the 1,650 megawatt pressurized water reactor to around $13.67 billion, an increase of roughly $1.65 billion.

The repair announcement came weeks after EDF and Framatome reported finding welding problems involving 16 generators installed in six operating reactors in plants in France. Issues also were found with components not yet in service, including at Flamanville.

EDF said the reactor units include reactors no. 3 and 4 at Blayais, reactor no. 3 at Bugey, reactor no. 2 at Fessenheim, reactor no. 4 at Dampierre-en-Burly and reactor no. 2 at Paluel. It said in a statement that it "believes that the observed deviations do not adversely affect the components’ fitness for service and do not require immediate action."

The components not yet in service are the four steam generators and the pressurizer at the Flamanville Unit3 EPR, as well as three new steam generators that have not yet been installed and that were intended to replace the steam generators on reactor units no. 5 and 6 at Gravelines.

In June, ASN, the French nuclear regulator, said that EDF would have to repair the faulty welds in the Flamanville reactor’s containment building, and also rejected the utility's request to delay repairs until 2024, after the plant's expected startup.

In a similar procedure two years ago, ASN ruled that Flamanville could start up despite weak spots in the steel of its reactor vessel cover. The regulator ordered the utility to replace the reactor cover by 2024 at the latest.

Welding defects in a system that directs steam produced in the plant's steam generators to its turbine were found in March 2018 during a regulatory inspection. The inspection included examining the welds in the plant's primary and secondary systems, and was intended to set a baseline condition of the plant before it begins operating.

The utility went on to inspect 150 welds and found that 33 had quality deficiencies that needed to be repaired. Another 20 welds were to be redone, even though they did not have any defects, as they fell short of quality goals set by the utility. For 10 other welds, EDF submitted a proposal to regulators detailing a specific justification method to ensure safety through the plant's operating life. The remaining 85 welds were said to be compliant, the utility said.

Re: Robots will repair faulty welds at this nuclear power plant
#1

Since when are there faulty welds at nuclear power stations?

Re: Robots will repair faulty welds at this nuclear power plant
#2
In reply to #1
Jpfalt

Always. That's why they do quality inspections and tests. The faults are found and repaired or analyzed to determine if they can stay in place safely for the life of the plant or system operation. You will note from the article that several welds will be redone that meet standards, but the utility thinks they need to be better.