On Aug. 1, 2019, at 1:23 a.m. local time, a 30 in diameter natural gas transmission pipeline owned and operated by Enbridge Inc. ruptured near Danville, Kentucky.

According to a preliminary accident report issued by the National Transportation Safety Board (NTSB), the rupture released about 66 million cubic feet of natural gas, which ignited, resulting in the death of one person, the hospitalization of six people and the evacuation of 75 residents from a nearby mobile home park.

The NTSB said the fire destroyed five nearby residences, damaged 14 other residences and burned about 30 acres of land including railroad tracks owned and operated by Norfolk Southern Corp. During the explosion, a 33.2 ft long section of the pipeline was ejected and landed about 481 ft southwest of the rupture site.

Initial data provided by Enbridge from its gas control center in Houston showed that a rate-of-change gas pressure alarm was received at 1:24 a.m. for the pipeline — known as Line 15 — on the south side of the Danville compressor station. A compressor station operator also received the alarm. 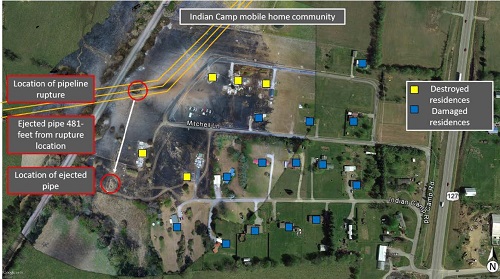 Aerial view of the blast site in Kentucky. Source: NTSBIn response to the accident, the NTSB said that Enbridge personnel isolated the affected pipeline segment while fire crews worked to evacuate residents and minimize the spread of the fire. Isolating the affected segment required closing one valve at the Danville compressor station, located 3.5 miles north of the rupture, and manually closing another valve located about 19 miles south of the compressor station.

Enbridge personnel isolated the ruptured pipeline at 2:19 a.m. The natural gas fire was reported under control by emergency responders at 2:56 a.m.; fire suppression of the surrounding area ended at 3:20 a.m.

The NTSB report said that at the accident location, three Enbridge pipelines transport natural gas from Pennsylvania to Mississippi through a common corridor. The ruptured pipe was produced by A.O. Smith Corp. and placed into service in 1957. The pipe had an electric flash-welded seam and was coated with coal tar.

The portion of Line 15 at the rupture site consists of 0.375 in wall thickness steel pipe, with a maximum allowable operating pressure of 936 pounds per square inch, gauge (psig). When first constructed, gas in Line 15 flowed south-to-north; however, in 2014 Enbridge reversed the gas flow to north-to-south. At the time of the rupture, gas in Line 15 was flowing north-to-south and was operating at 925 psig.

On August 8, as a result of the accident, the Pipeline and Hazardous Materials Safety Administration (PHMSA) issued a corrective action order to Enbridge. In its finding, PHMSA said that the adjacent pipelines "could potentially have been affected" by the Line 15 failure and that they should not be restarted without further investigation.

PHMSA said that the risk of concussive force or thermal damage to the adjacent lines could not be ruled out. It also said that given the uncertainties around what caused the failure, the pressure at which gas is transported, the age and type of pipe, the risk of fire in nearby areas and the potential damage to the two adjacent pipelines, it ordered immediate corrective action. The order mandated an immediate shutdown of the affected pipeline segment, reduced operating pressure along the rest of the pipeline and a detailed restart plan.

In response to the rupture, Enbridge said that it isolated and shut down all three pipelines in the area of the accident. Line 15 will be isolated from the adjacent pipelines from Mississippi to Pennsylvania and will operate at or below 80% of normal operating pressure until the terms outlined in the PHMSA corrective action order are met, and PHMSA approves Line 15 to return to full service.

NTSB said that Line 15 ruptured once before, in November 2003 in Moorhead, Kentucky. That rupture released about 167,100 million cubic feet of natural gas, which ignited. PHMSA said the 2003 failure also occurred on A.O. Smith-manufactured pipe, and resulted from "interactions between hard spots and mid-wall lamination."

Re: Report offers details into gas pipeline failure and blast
#1

Maybe my eyes are playing tricks on me, but it looks like you can see some sort of outline where the pipeline goes?