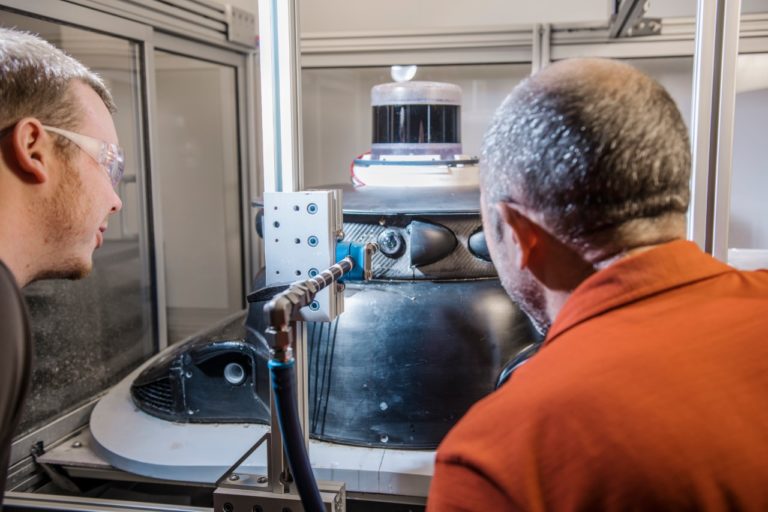 Ford has developed an "air curtain" to remove debris from obstructing the lidar (light detection and ranging) sensor and lens that are held in the turret that sits atop the roof of most autonomous vehicles. There, the lidar enables the autonomous vehicle to "see" its surroundings.

Yet, the sensor is exposed to all manner of debris including dust, snow, bird droppings and bugs. In traditional vehicles, removing this debris tends to be a simple matter solved by applying windshield fluid and windshield wipers to the automobile's windshield. However, the problem is considerably more significant in autonomous vehicles. Once the lens of the lidar sensor is covered in bugs or other residue, it is no longer capable of analyzing the reflections of the laser, which is the laser sensor's primary function. Obstructed by debris, the laser may not be able to penetrate the opaque lens, thereby causing the lidar sensor to malfunction, potentially resulting in traffic accidents among other operational issues.

As such, the air curtain, which sits near the lidar sensor, “blows” air in the direction of the sensor and the lens, forcing debris away from the lens and thus preventing it from covering the sensor. Alone, the air curtain is not yet entirely effective, which is why Ford added a series of 16 high pressure “sprayers” to locations along the top of the vehicle’s turret. Connected to an artificial intelligence (AI) system, the sprayers work independently of each other. Once the system detects debris, the appropriate sprayer will be activated, precisely targeting the affected location with high-pressure fluid.

As soon as the AI system determines the type of debris that needs to be removed, it will adjust the water pressure accordingly — for instance, bug residue removal might require more water pressure than dust removal. After the material has been removed, the air curtain blower will dry the lens.

According to its developers, the air curtain blower offers another unexpected benefit in addition to deterring bugs and other debris from landing on the lens of the lidar sensor. The air curtain also cools other electronics located in and around the vehicle's turret.

Ford will continue to develop the system so that ultimately the debris can be removed in less than a second.