The National Transportation Safety Board (NTSB) called for new national requirements for seating and seat belt systems in limousines, citing evidence it said it gathered in investigations of accidents in New York, Illinois and New Jersey.

The Safety Recommendation Report recommended that the National Highway Traffic Safety Administration (NHTSA) require lap/shoulder belts for each passenger seating position on all new vehicles modified to be used as limousines. It also would require seating systems in these vehicles to meet minimum performance standards to ensure their integrity during a crash.

The NTSB also called on the National Limousine Association to educate members on the benefits of proper seat belt use and recommended they develop methods to ensure seat belts are functional and accessible to passengers and encourage passengers to use them.

It also recommended that the New York State Department of Transportation ensure all limousine seat belts are functional and accessible in their regular inspection process. The federal accident board repeated an earlier recommendation that the state pass legislation that provides for primary enforcement of a mandatory seat belt use law for all vehicle seating positions equipped with a passenger restraint system, including passenger seats in limousines.

The NTSB is investigating the Oct. 6, 2018, crash of a stretch limousine in Schoharie, New York, that killed the driver, 17 passengers and two pedestrians. Despite severe damage to the vehicle’s front end and intrusion into the passenger compartment, the rear portion of the limousine remained relatively intact, retaining survival space. 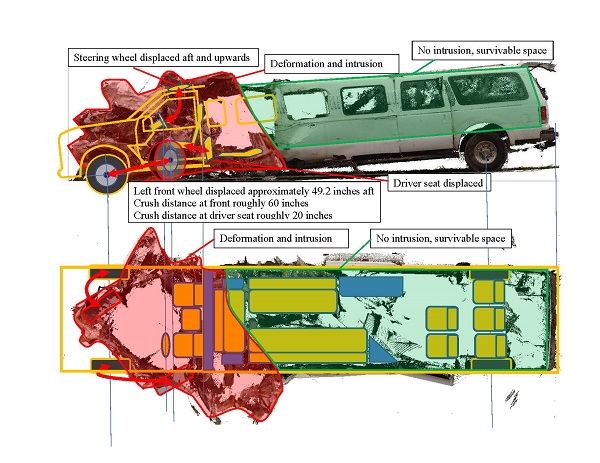 Drawing showing the damaged vehicle and key aspects of the investigation. Source: NTSBThe safety board said that surviving a crash requires three basic components, which is called a “chain of survivability.” First, the occupant survival space must remain intact and not be compromised by intrusion; second, the crash impact loading (crash forces) experienced by the occupants must be within survivable limits; and third, the postcrash environment must remain survivable for evacuation.

NTSB said that the 2001 Ford Excursion involved in the Schoharie crash was "significantly modified." In particular, it was stretched 144 inches and the interior in the stretched region was reconfigured with perimeter-style bench seating. The three benches were equipped with passenger lap belts.

In addition to the bench seats, five of the six original rear seats were retained, along with their factory-equipped lap/shoulder belts. The NTSB post-crash inspection indicated 21 belted seating positions, although seating positions could range from 18 to 22. 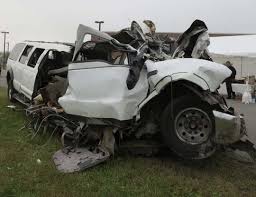 Right front of the accident vehicle. Source: NTSBAfter the collision, the NTSB found the side- and rear-facing bench seats failed in the direction of the crash forces and that the strength of these seats and their anchorages were inadequate during the crash. In comparison, the NTSB said the original Ford passenger seats in the rear of the vehicle remained attached to the floor and intact.

Evidence from first responders and post-crash examinations of victims indicated that none of the passengers were wearing the passenger lap or lap/shoulder belts at the time of the crash. The NTSB found that the Schoharie crash was an extreme event in which the occupants were subject to high crash forces.

The NTSB has investigated other limousine crashes, such as those in Elgin, Illinois, and Cranbury, New Jersey, that involved lower crash forces but still resulted in serious injuries and fatalities. In all three crashes, properly designed and installed seats and seat belts systems – and seat belt use – had the potential to mitigate injuries and increase survivability, the safety board said.

The NTSB found that if seat belts on limousines are not readily accessible to the passengers, they are unlikely to be worn.

On October 6, 2018, about 1:55 p.m., a 2001 Ford Excursion XLT stretch limousine, operated by Prestige Limousine Chauffeur Service, was traveling south on New York State Route 30 in Schoharie, New York. The limousine was occupied by a 53-year-old driver and 17 passengers, and was traveling from Amsterdam, New York, to Cooperstown, New York. 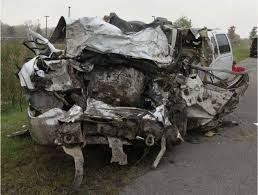 Front the vehicle showing crumpling into the driver's area. Credit: NTSBAs the limousine traveled on NY-30, it approached New York State Route 30A, which forms a T-intersection controlled by a stop sign. The posted speed limit is 50 mph on NY-30 and 55 mph on NY-30A.

The limousine did not stop at the stop sign, the NTSB said. Instead, it crossed the intersection at a speed "considerably in excess" of the posted limit and entered the paved driveway of a restaurant parking lot. The limousine struck an unoccupied 2015 Toyota Highlander SUV that was parked in a grassy area adjacent to the driveway. Three pedestrians were in the proximity of the SUV; two of these pedestrians were in the SUV’s path when the limousine struck it. They were subsequently struck by the SUV and received fatal injuries.

The limousine continued across the edge of the parking lot and into a ravine with undergrowth and trees, where it collided with an earthen embankment and came to rest. As a result of the crash, 20 people died, including all 18 limousine occupants and two pedestrians.

Despite the severe damage and intrusion, the safety board said that rear portions of the passenger compartment remained relatively intact, maintaining space for the occupants to survive.

NTSB said the limousine driver was wearing his lap/shoulder belt at the time of the crash and his air bag deployed; however, the driver’s compartment had a complete loss of survival space. The NTSB concluded that the crash "was not survivable" for the limousine driver. There was also intrusion into the passenger seats immediately behind a privacy divider. Specifically, passengers seated in these rear-facing seats and in the forward portion of a side-facing bench seat on the driver’s side were at risk of fatal injuries from intrusion and the vehicle crush that compromised the driver’s compartment. Even so, a large portion of the limousine’s passenger compartment was not compromised by intrusion and "retained survival space," NTSB said. 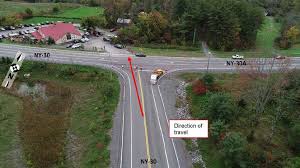 Image showing limousine's direction of travel and accident location. Source: NTSBNTSB said that even in severe collisions such as this one, properly designed seats and seat belt systems "have the potential to mitigate injuries and improve the chance of survival when occupant survival space is retained." It also said that seat integrity and seat belt design should work in synchrony to minimize the impact loading experienced by occupants.

Postcrash examination of the limousine’s non-original equipment bench seats showed that the seat frames were constructed from welded square tubular steel and were attached to the floor using individual screws that were mounted through metal seat anchor straps.

This meant that the strength of the non-OEM side- and rear-facing bench seats and their anchorages was "inadequate" to keep them secured to the floor during the collision, NTSB said, even without the additional loading that would have occurred with belted passengers. In contrast, the safety board said that the rear OEM seats remained attached to the floor and intact, despite experiencing some damage.

NTSB said that these "were not available in the crash limousine." It concluded that the non-OEM seats and lap belt systems in the modified portion of the passenger compartment, including their structural anchorage points, "were not properly designed for occupant crash protection."

The safety board said that the Schoharie crash shows that a "comprehensive solution is required" to address the multiple occupant protection problems associated with seating systems on limousines that have been modified from other types of vehicles. The NTSB recommended as a result that the NHTSA require that seating systems installed in new vehicles modified to be used as limousines meet minimum performance standards to ensure their integrity during a crash.

By posting a comment you confirm that you have read and accept our Posting Rules and Terms of Use.
Advertisement
RELATED ARTICLES
NTSB Report Calls for School Bus Safety Upgrades
Study: Vehicle backseats need tech and safety upgrades
Watch: Design flaw, rules loophole cited in fatal helicopter accident
In probing a fatal Tesla crash, NTSB faults a state highway agency
Why did a Tesla veer left before a fatal crash?
Advertisement