Europe’s first large-scale plant to produce jet fuel from domestic and commercial waste may soon be operating in the U.K. Altalto Immingham Limited, a subsidiary of renewable fuels company Velocys and a collaboration 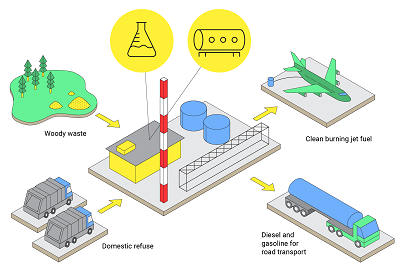 Construction of the proposed plant is slated for 2021, with commercial production to begin in 2024. Source: Velocyswith British Airways and Shell, has submitted a planning application to develop a waste-to-fuel project in Immingham, North East Lincolnshire.

The proposed facility will divert over a half million tons per year of non-recyclable waste from landfills and incinerators for the production of aviation fuel. A 70% reduction in greenhouse gas emissions will be gained for every ton of sustainable jet fuel that replaces a ton of conventional fossil fuel, equivalent to removing 40,000 cars per year off the road.

British Airways will purchase the jet fuel to help the airline meet industry targets of carbon-neutral growth starting in 2020 and a 50% reduction in carbon dioxide emission levels by 2050 from 2005 levels.

The fuel synthesis technology developed by Velocys uses micro-channel Fischer-Tropsch reactors with a proprietary catalyst to convert solid wastes to synthesis gas and then to liquid transport fuels. Construction of the proposed plant is slated for 2021, with commercial production to begin in 2024.

By posting a comment you confirm that you have read and accept our Posting Rules and Terms of Use.
Advertisement
RELATED ARTICLES
British Airways to Fly on Fuel from Waste
First flight with renewable fuels from the desert
Sustainable jet fuel cuts the mustard – and emissions
Maiden Flight of the World's Largest Jet Engine
Sustainable Fuel Project Takes Flight
Advertisement