Methane leaks from offshore oil and gas rigs are quantified

Atmospheric methane emissions have been steadily increasing since 2006, with biogenic sources such as wetlands and livestock, and anthropogenic activities, including fossil fuel use, identified as contributing culprits. An overlooked source is leakage of this greenhouse gas from oil and gas wells, a phenomenon which was quantified at eight oil and gas production platforms in the North Sea by an international research team. 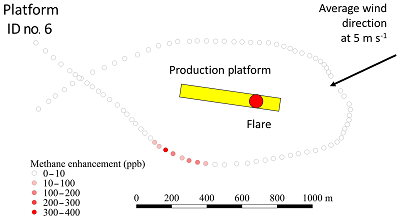 Methane concentration data collected with a laser-based analyzer during normal platform operations were combined with meteorological data in a Gaussian plume model to estimate emissions for each site. A median emission of 6.8 g methane per second was determined for each platform. The methane loss was estimated to account for 0.19% of natural gas production, far higher than the 0.13% reported to the U.K. National Atmospheric Emission Inventory for total methane loss from U.K. platforms in the North Sea. The inventory typically includes emissions associated with offloading and flaring, but does not account for the methane leakage observed during normal platform operation.

Re: Methane leaks from offshore oil and gas rigs are quantified
#1

If one searches the very topic one finds a lot of statements similar to:

What you do not find is

That there is much more NATURAL seepages than anticipated

That gas production does reduce the amount of gas from natural seepages.

Would be worthwhile to see a study made in this direction to at least pretend that objectivity is met!