The conventional means of measuring blood pressure with a sphygmomanometer, or arm cuff meter, might one day be replaced by brief videos, captured with a smartphone, of a patient’s face.

Such a contactless diagnostic method was developed by researchers from University of Toronto, Canada; Zhejiang 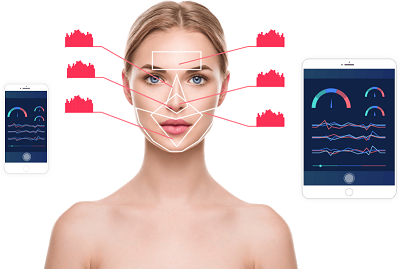 A system that measures blood pressure using smartphone video is currently 95% accurate. Source: NuralogixNormal University, China; and Hangzhou Normal University, China. It is a smartphone-based technology called transdermal optical imaging. The optical sensor on a smartphone captures the reflected red light from hemoglobin, which allows the technology to visualize and measure blood flow changes under the skin. The method processes imperceptible facial blood flow changes from videos taken with the smartphone camera and uses advanced machine learning to determine blood pressure from this optical data.

The diagnostic approach was tested by measuring the blood pressure of 1,328 adults by capturing two-minute videos of their faces on an iPhone. The smartphone-based method proved 95% accurate when compared with clinical cuff-based blood pressure measurement, both for systolic and diastolic numbers.

A startup company formed by the researchers has launched a commercial app designed to measure stress levels and resting heart rate from 30-second videos of a user’s face. A similar version to be released in China will return blood pressure measurements.

By posting a comment you confirm that you have read and accept our Posting Rules and Terms of Use.
Re: Watch how smartphone selfies can measure blood pressure
#1

This is quite interesting. I've known people who seemed to have high blood pressure from their flushed complexion. I can see how measuring pulse rate would not be difficult, but I'm surprised that blood pressure measurement doesn't have to be calibrated for each person.

Re: Watch how smartphone selfies can measure blood pressure
#2

The article doesn't mention whether or not there was a cal required for each person. I would have to presume that there would have to be, and not only that, but that the measurement repeatability will depend on non-stationary factors, such as the person's hydration level, tan, amount of beard growth since last shaved, camera angle, capillary health, and probably other factors.

One can infer these details from the brief article published by the group who initially published the data (https://www.ahajournals.org/doi/10.1161/CIRCIMAGING.119.008857).

In it, they indicate that they trained and tested their model on data gathered in the lab under controlled conditions from a cohort of only normotensive adults. They did so off-line, namely using a portion of the data set to train, and another portion to test. This is better than testing on the same portion of the data set as used for training, yet will eliminate any real world variation in uncontrolled factors such as those I list above.

They did not return to re-test members of the cohort to obtain fresh data, nor did they test anyone outside the training and test cohort. Those steps would be necessary to prove the basic functionality of the model. Furthermore, proof of the usefulness of the model would require testing on hypertensives, which was not done, or at least was not published.

I would say the group's paper squarely impugns the popular press's presentation of their work, including in the likely source articles I could find for the one linked in the Specs & Techs newsletter, which also avoided the topic, such as the U of Toronto's PR and a more extensive article in the Daily Mail (https://www.dailymail.co.uk/health/article-7326547/Blood-pressure-selfies-used-monitor-patients-96-cent-accuracy-study-claims.html).

If I may offer a general criticism to the editor, gee whiz articles like these tend to omit the critical details, which is a general disservice to your readers -- we don't spend our time reading this stuff for entertainment; we're engineers, remember?

Such omissions are made intentionally by the universities and companies that host this sort of work. They do so to maximize enthusiasm and burnish reputations. Please have your staff put the extra minutes into determining the facts beneath the hype.

Re: Watch how smartphone selfies can measure blood pressure
#3

The Apple App store used to have the contact-less pulse measurement app, but it has been removed now. Is this a revised version of it?