A study by researchers at the Department of Energy's Lawrence Berkeley National Laboratory suggests that if every building in California had a "cool" roof by 2050, they would help protect urbanites from the consequences of dangerous heatwaves.

Coating roofs white or installing sunlight-reflecting tiles in urban clusters could be one solution, according to the researchers. 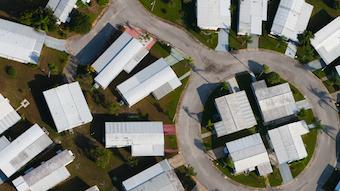 Reflective roofs could bring down heat wave exposures, researchers said. Credit: Lawrence Berkeley National LabThe researchers predict that heatwaves are likely to become two to 10 times more frequent across California by the middle of the century. They said that if cool roofs were in the San Francisco Bay Area, Los Angeles, San Diego and Sacramento the reflective roofs could bring down heatwave exposures (defined as each time a person experiences a heatwave) by 35 million each year, compared to an estimated 80 million heatwave cases in 2050 with no increase in cool roof adoption.

"Urban spaces are a small fraction of the globe, but they are where most people live," said Pouya Vahmani, a postdoctoral research fellow in Berkeley Lab's Climate and Ecosystem Sciences Division and lead author of the study. "If we're able to cool those areas even a little bit, it can have a huge impact on health and roll back significant impacts of climate change."

An earlier study by Berkeley Lab modeled several different types and ages of homes, retail stores and office buildings in cities across the U.S. It found that sunlight-reflecting “cool” exterior walls can save as much or more energy as sunlight-reflecting cool roofs.

Cool walls are generally considered to have a higher-than-average solar reflectance. That means they reflect a higher fraction of incoming sunlight than average exterior walls. Cool walls also have high thermal emittance, which means they can efficiently release absorbed heat.

Walls receive less intense sunlight than roofs, but also tend to be less insulated. Across most of the U.S., roughly 40% to 60% of all buildings were built before 1980, when building codes generally specified less wall insulation than is required today. As a result, cool-wall savings in older buildings could be three to six times greater than for new buildings, the study said.

The Berkeley researchers said that repainting the exterior walls of pre-1980 buildings with cool paint is not difficult to do, as many light-colored cool paints can be found in local home supply stores.

The cool roof research said that city dwellers are vulnerable to a heat wave's negative effects due to the urban heat island effect in which air temperatures spike several degrees higher in cities than in surrounding vegetated areas. Built surfaces readily absorb daytime heat and release it at night, keeping cities warmer overnight. When nighttime temperatures remain elevated, human bodies work hard to cool down and recover from the day's heat. In summer, when urban heat island effects peak, human health can be compromised.

Alongside reduced exposure to heat waves and associated health risks, the study predicted that widespread adoption of cool roofs could cut energy demands by reducing air conditioning use.