Researchers from McGill University and Université de Montréal have discovered more evidence to prove that black phosphorus may be a viable option for use in chips of the future. 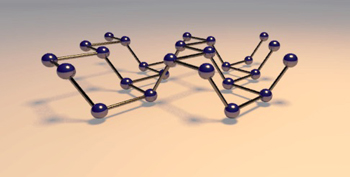 Molecular arrangement of the black phosphorus. Source: McGill UniversityThe researchers found that when electrons move in a phosphorus transistor, they only do so in two dimensions.

"Transistors work more efficiently when they are thin, with electrons moving in only two dimensions," says Thomas Szkopek, an associate professor in McGill's Department of Electrical and Computer Engineering.

Black phosphorus is known as phosphorene when separated into single atomic layers, and unlike graphene, it can be switched on and off on command.

"To lower the operating voltage of transistors, and thereby reduce the heat they generate, we have to get closer and closer to designing the transistor at the atomic level," Szkopek says. "The toolbox of the future for transistor designers will require a variety of atomic layered materials—an ideal semiconductor, an ideal metal and an ideal dielectric. All three components must be optimized for a well-designed transistor and black phosphorus fills the semiconducting material role."

When conducting this research, the team observed the electrons moving in a phosphorus transistor under the influence of a magnetic field.

"What's surprising in these results is that the electrons are able to be pulled into a sheet of charge which is two dimensional, even though they occupy a volume that is several atomic layers in thickness," Szkopek says.

The researchers believe that it is significant because it could potentially lead to manufacturing of such material.

"There is a great emerging interest around the world in black phosphorus," Szkopek says. "We are still a long way from seeing atomic layer transistors in a commercial product, but we have now moved one step closer."

Semiconductor Chip Made from Wood-Derived Material

By posting a comment you confirm that you have read and accept our Posting Rules and Terms of Use.
Advertisement
RELATED ARTICLES
A Once Forgotten Element Holds Promise for the Future of Electronics
Efficient Hydrogen Production with Black Phosphorus Photocatalyst
Profiling the Properties of 2D Blue Phosphorus
Transistor Technology Could Make the Impossible, Possible
New Transistor Could Open Door to Flexible Electronics
Advertisement