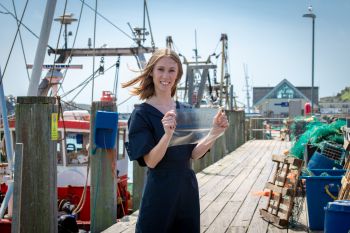 A product design student at the University of Sussex in the U.K. has developed a plastic film wrap alternative that is composed of fish skin, fish scales and red algae.

The bioplastic, which University of Sussex student Lucy Hughes has dubbed Marinatex, is composed of fish scales and fish skin. Combined with red algae acting as a biopolymer, the mixture poses an alternative to standard food-packaging plastic film.

According to Hughes, the bioplastic is fully biodegradable and compostable, biodegrading in soil in less than one month without leaching toxins. Likewise, the film is reportedly stronger than typical plastic bags.

Following a visit to a Newhaven-based sustainable fishing company, Hughes was inspired to develop a use for organic waste material from the fishing industry. By combining the organic waste with a biopolymer such as red algae, the material proved itself as a plastic film substitute that is less expensive to produce and degrades faster than other bioplastic solutions.

According to Hughes: "Algae bioplastics are becoming more common, but the issue I faced during development was that the sheets I made without the fish waste seemed to revert back into a crinkled seaweed shape. I needed to find a material that would make the formula more consistent. I challenged myself to find a material that was from a local waste stream. My initial experiments involved other types of fish waste such as mussel shells and crustacean skeletons before settling on fish waste. The result was a locally sourced sea-based solution."

Created as part of her undergraduate product design degree, Hughes is interested in further developing the bioplastic film. She believes that with the right amount of support, the product could be market-ready in just over a year.

Marinatex joins other companies and researchers attempting to develop plastic alternatives to combat the plastic waste overwhelming the oceans. Other attempts include researchers from the University of Nottingham, who have been developing 100% biodegradable and edible food packaging, and a London-based start-up developing a single-use plastic alternative using lobster shells.

By posting a comment you confirm that you have read and accept our Posting Rules and Terms of Use.
Re: New bioplastic food film made from fish scales, red algae
#1

It's great to have a biodegradable product but what about the sustainability?

Fish scales and skin is a limited resource. Additionally, the by-product quantities from current sources would hardly seam enough to satisfy the needs of a small community.