The U.S. Chemical Safety Board released its final investigation report into a January 2018 blowout that fatally injured five workers at the Pryor Trust gas well in Pittsburg County, Oklahoma.

The report identifies a lack of regulations governing onshore drilling safety as well as shortcomings in safety management systems and industry standards as contributing to the accident. The report calls on regulators, industry groups, the state of Oklahoma and companies to address such gaps.

CSB investigators determined that the cause of the blowout and rig fire was the failure of two preventive barriers that were intended to be in place to stop a blowout. The primary was hydrostatic pressure in the well produced by drilling mud, and the secondary barrier was human detection of gas flowing into or expanding in the well and activation of the rig’s blowout preventer (BOP). The presence of these preventative barriers is considered an industry best practice.

The report said that unplanned, underbalanced drilling and tripping operations allowed a large quantity of gas to enter the well. Safety-critical operations called “flow checks,” used to determine if gas is in the well, were not performed.

CSB Interim Executive Kristen Kulinowski said, “Our investigation found significant lapses in good safety practices at this site. For over 14 hours, there was a dangerous condition building at this well. The lack of effective safety management at this well resulted in a needless catastrophe.”

The final report outlines several factors contributing to the loss of barriers, including a lack of planning, training, equipment, skills and procedures. Because oil and gas well drilling is exempted from the OSHA’s Process Safety Management standard, which governs safety for chemical processing facilities, OSHA has been utilizing the general duty clause, which “protects workers from serious and recognized workplace hazards,” but does not address safety hazards associated with drilling for oil and gas. As part of its report, the CSB urged OSHA to develop "effective oversight that addresses the hazards unique to the onshore drilling industry." 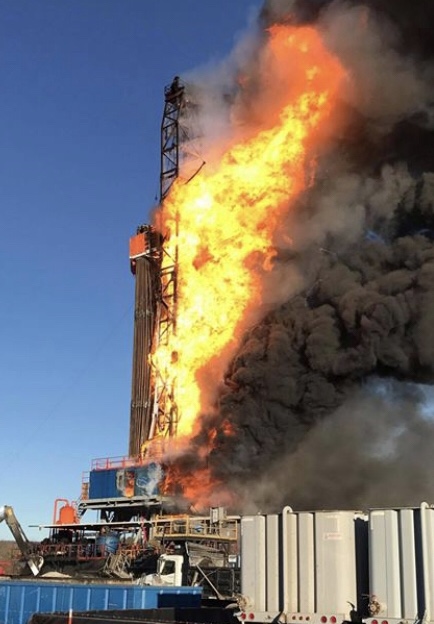 The blowout-caused fire lasted for several hours after the initial explosion. Credit: CSBThe CSB also found that the drilling contractor failed to maintain an effective alarm system. Likely due to excessive “nuisance” or unnecessary alarms, the entire alarm system was disabled by rig personnel, the report said. Ultimately, the lack of critical alarms contributed to workers' lack of awareness that flammable gas was entering the well during operations before the incident.

On Jan. 22, 2018, a blowout and rig fire occurred at Pryor Trust 0718 gas well number 1H-9, located in Pittsburg County. The fire killed five workers who were inside the driller’s cabin on the rig floor. They died from thermal burn injuries and smoke and soot inhalation. The blowout occurred about three-and-a-half hours after removing drill pipe (“tripping”) out of the well.

A day earlier, on January 21 at 6:30 a.m., while drilling at about 13,000 ft in the horizontal section of the well, gas began entering the wellbore. At 7:30 a.m., gas started to reach the surface of the well, apparently showing as elevated gas units in the mud. The gas in the mud caused mud to spit out and cover a portion of the rig, the mud pits and other equipment.

At 8:35 a.m. the next morning, the floorhand was standing over the open well hole on the rig floor when he again saw mud flowing out of the open rotating head bowl. He communicated that the mud from the wellbore was shooting up steadily, getting closer to the rig floor.

The floorhand and the rig manager made their way to the stairs on the rig floor opposite the driller’s cabin, where they were able to escape to the ground. The derrickhand was high in the mast at the time of the blowout and tried to get down by hooking himself onto the slow descent line (an escape line like a “zip line”). When that proved unsuccessful, he threw his legs around the descent cable and shimmied down the cable toward the ground. He fell off the slow descent line near its bottom from a height of about 10 to 12 ft.

The CSB said the cause of the blowout and rig fire was the failure of both the primary and secondary barrier, which were intended to be in place to prevent a blowout. Contributing to the loss of barriers were many factors, including:

Investigators said that when the blowout mud and gas ignited, it created a fire on the rig floor. All five of the workers inside the driller’s cabin were trapped because fire blocked the two exit doors. The investigation found that no guidance exists to ensure that an emergency evacuation option is present on board similar rigs or can protect workers in the driller’s cabin from fire hazards.

The CSB called on the American Petroleum Institute to address design improvements needed to protect driller’s cabin occupants from blowout and fire hazards. The report also recommends to API to create guidance on alarm management for the drilling industry, to help ensure alarm systems are effective in alerting drilling crews to unsafe conditions.