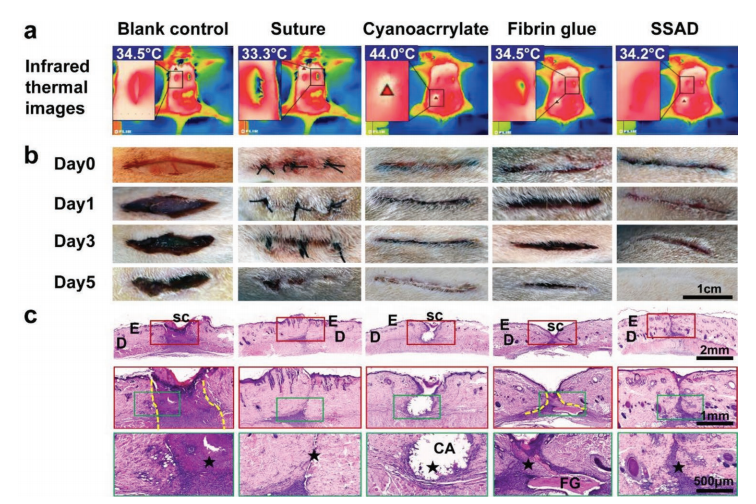 Research recently detailed in the journal Advanced Functional Materials suggests that mucus secretions from the Chinese giant salamander effectively seal and heal wounds, potentially better than the synthetic adhesives in use today.

The bioadhesive, called SSAD, is derived from salamander skin secretions. The secretions are freeze-dried and combined with a saline solution, creating a gel-like glue that effectively closed wounds and expedited healing in both pigs and rats, according to its developers. Overall, the mixture reportedly performed better than current synthetic adhesives used in medical settings in lieu of staples and sutures.

During testing, the bioadhesive reportedly demonstrated strength and flexibility and reduced inflammation and scarring when trialed on pigs and rats. The team observed that SSAD closed a bleeding wound on a rat in less than 30 seconds and successfully healed skin wounds on diabetic rats during testing. SSAD degraded entirely inside the rats' bodies a few weeks after application.

Compared to wound-closing approaches such as suturing or stapling, surgical glues tend to decrease the risk of infection and the opportunity for further tissue damage and stress. However, current synthetic varieties, which are designed to be strong, inexpensive, sticky, biofriendly and easy to produce, typically have a host of limitations including cell toxicity, poor elasticity and the application of excessive heat at the site of the wound. Likewise, the current alternative adhesives may slow down wound healing, which is not the case with the SSAD solution, according to researchers.

“We anticipate that the low cost, environmentally friendly production, healing-promotion ability, and good biocompatibility of SSAD provide a promising and practical option for sutureless wound closure, as shown by the current research,” the researchers wrote in the study. “SSAD will likely overcome some limitations associated with currently available surgical glues and can perhaps be used to heal wounds on other delicate internal organs and tissues.”

Another benefit of the new substance, according to researchers, is that although the Chinese giant salamander is endangered, capturing SSAD will not harm the giant amphibian.

“You don’t have to kill any animals,” said co-author Shrike Zhang of Harvard Medical School. “You just once in a while very gently scratch their skins to harvest the mucus. It’s very sustainable and you can obtain this adhesive for a long time.”

The research is detailed in the journal Advanced Functional Materials.

By posting a comment you confirm that you have read and accept our Posting Rules and Terms of Use.
Advertisement
RELATED ARTICLES
Suturing and sealing alternatives for the healthcare industry
Team creates nontoxic, biodegradable adhesive from plants and food
Wound healing expedited by electrically charged thin-film patch
Team develops hydrogen peroxide e-bandages for wound-healing
Gel Patch Heals Wounds and Prevents Scars
Advertisement