Could artificial islands produce all of the world's fuel?

Under the scheme, hydrogen (H2) would be produced from solar energy and ocean water, which then would be converted into methanol on site using CO2 extracted from the seawater.

The researchers, which represented from ETH Zurich, PSI and the Universities of Zurich, Bern and the Norwegian University of Science and Technology (NTNU) and Empa, analyzed a scenario that they presented in the journal Proceedings of the National Academy of Sciences. 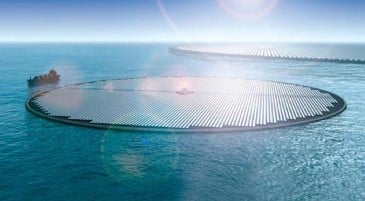 Artist's vision of floating islands and supply ship. Source: NovatonThe idea is based on floating platforms equipped with photovoltaic systems. Rather than trying to transport energy from the platforms to shore, the researchers proposed that liquid methanol (CH3OH) and gaseous methane (CH4) be produced from carbon dioxide and hydrogen. Their idea is that the raw materials could be obtained directly from the ocean or produced there.

Large-scale power-to-gas plants that convert hydrogen and CO2 already exist, but the space required for a worldwide supply of fuel would be enormous, the researchers said. They estimated that an area of around 170,000 km2 would be needed to produce the annual demand for global freight transport. This could best be achieved by solar power systems at sea, they said. Carbon dioxide also could be extracted from the air at sea, but an alternative would be to use the roughly 125 times higher CO2 concentration of seawater for the required gas.

The researchers said that in existing plants, CO2 extracted from the atmosphere is mostly used to produce methane, which also would be possible on the solar islands. The researchers decided, instead, to produce a liquid fuel because it is easier to transport. In addition, methanol can be used not only as a fuel, but also to manufacture other chemical products, such as precursors for polymer production.

Such a "methanol island" would cost around $90 million, the researchers estimated. This would consist of around 70 photovoltaic islands with a diameter of around 100 m2 and a ship with the electrolysis and synthesis plants. This would result in a total area of around 550,000 m2. They said that a total of 170,000 such islands would be needed to recycle as much CO2 as is currently emitted.

Re: Could artificial islands produce all of the world's fuel?
#1

These would have to be built like oil platforms I'm guessing, they sure wouldn't be floating in the ocean, cause that would just be crazy....I'm also guessing the price tag would be trillions of dollars...many trillions...many many trillions...

This is of course an understatement, because you would need an oversupply for storage and winter and night....so at least 3 times that..about 250 miles square....

Re: Could artificial islands produce all of the world's fuel?
#2
In reply to #1
SolarEagle

One square kilometer of solar panels (one million square meters) can fit 150 million watts of capacity, or 150 MW. Utility-scale solar farms are now being installed for around $1/watt throughout the world, so this project would cost around $150 million. Land is typically below 5% of the total cost.Jan 19, 2018

Re: Could artificial islands produce all of the world's fuel?
#3
In reply to #2
SolarEagle

Re: Could artificial islands produce all of the world's fuel?
#5
In reply to #1
thewildotter

SE, these researchers must have never tried to build anything on or near an ocean or they would have realized just how profound your "they sure wouldn't be floating in the ocean, cause that would just be crazy..." comment is. Wind, salt spray, wave action, surface contamination, biological infestation, and vulnerability to corrosion would render this huge investment non-functional before very much of it could even be completed. Building them like oil platforms greatly increases costs and only slightly reduces the speed of deterioration. Floating or supported from the ocean floor, you could expect only a very short lifetime for something which must be exposed to the sun and involves thin metal conductors and electric currents for its operation unless you are talking about something biological which can reproduce, repair, and extend itself without continuous, crushingly costly human attention. The chance of ocean resident, factory produced, PV islands ever becoming a large scale success is even lower than that other absurd concept where satellites beam microwave power down to earth and that one would have had us all living(very briefly) in a cosmological microwave oven.

The older concept of enhancing and managing natural oceanic algal growth has a far better chance of not being a black hole into which you squander the entire economic output of mankind and get nothing for your money but permanent historical ridicule. SE, I know algae has been causing you trouble and I empathize. But... When life insists on throwing lemons at you, make lemonade.

Re: Could artificial islands produce all of the world's fuel?
#4

I don't trust research by researchers who cannot use proper units.

A diameter is not properly expressed in square meters.

It makes the calculation suspect.

550000 square meters is less than 1 square kilometer. Assuming there's some correlation between the CO2 needed to produce fuel and the CO2 emitted from burning fuel there's a strong suggestion that their comments or so contradictory. how can 170,000 square kilometers be required to produce the fuel just for there's transportation whereas only 55% of that would be needed to offset total carbon emissions?

I prefer my research from researchers poor little more cautious about their claims.

Re: Could artificial islands produce all of the world's fuel?
#6

One tsunami caused by an earthquake, and it's all for nothing.

Re: Could artificial islands produce all of the world's fuel?
#7

Why not capture the wave action as stored energy in accumulators to run a generator and also place solar panels on top of the floating, but anchored, structure that would be strong enough for storms, tsunami, etc.

Re: Could artificial islands produce all of the world's fuel?
#8
In reply to #7
truth is not a compromise

In deep enough water the wavelength of tsunamis is so much greater than the amplitude they are difficult to notice in blue water vessels. As long as these are not in shallow water, tsunamis wouldn't be much of a concern.