Researchers at Sandia National Laboratories, the Department of Energy’s Center for Integrated Nanotechnologies and the Aramco Research Center in Boston, have found that a particular form of nanoscale corrosion is responsible for unpredictably decreasing the working life of steel pipes.

Corrosion can be a costly problem for steel pipes that are used in a range of infrastructure and energy applications.

Using transmission electron microscopes, which shoot electrons through targets to take pictures, the researchers pinned the root of the problem to a triple junction formed by a grain of cementite — a compound of carbon and iron — and two grains of ferrite, a type of iron. This junction forms during most methods of fashioning steel pipe. 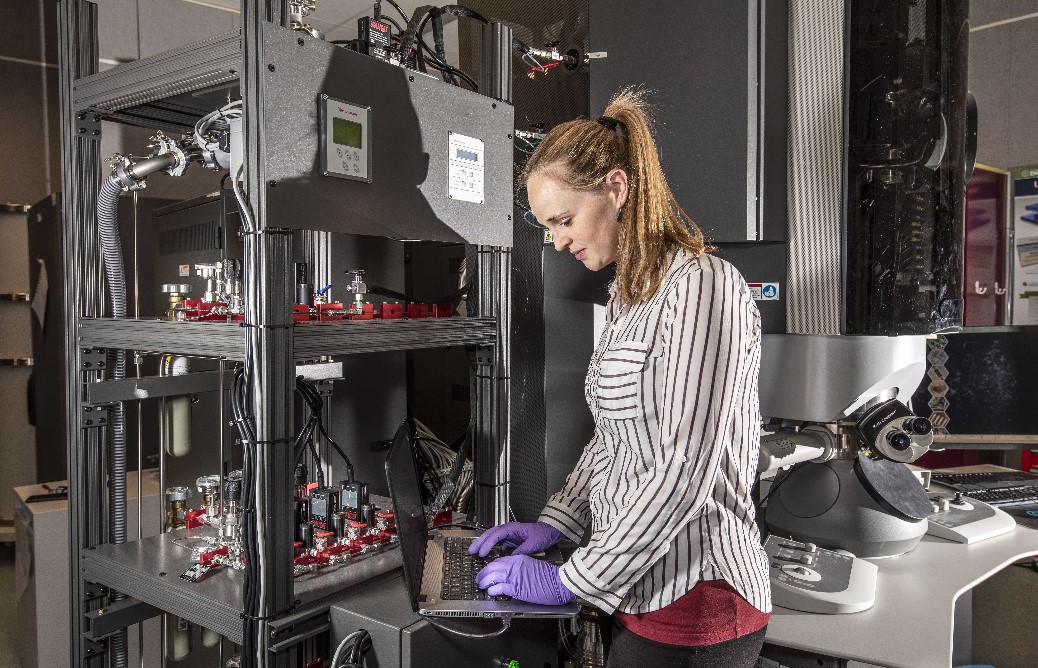 Sandia National Laboratories researcher Katherine Jungjohann, principal investigator and lead microscopist for a study that pinpointed a major cause of corrosion in pipelines, looks for corrosion with a new transmission electron microscope at the Center for Integrated Nanotechnologies. Source: Sandia National Laboratories/Randy MontoyaThe researchers found that interfacial disorder in the atomic structure of those triple junctions made it easier for the corrosive solution to remove iron atoms along the interface. Their research findings were recently published in the journal Nature’s Materials Degradation.

The researchers found that the corrosive process stopped when the triple junction had been consumed by corrosion. They noted that the crevice left behind allowed the corrosive solution to attack the interior of the steel.

Aramco senior research scientist Steven Hayden said that this was one of the first real-time observations of nanoscale corrosion in carbon steel, which is widely used in infrastructure. The research work is being translated into models that can be used to prevent corrosion-related accidents like infrastructure collapse and pipeline breaks.

For example, to mimic the chemical exposure of pipe in the field, thin samples were exposed at Sandia to a variety of chemicals known to pass through oil pipelines. The researchers put a dry sample in a vacuum and used a transmission electron microscope to create maps of the steel grain types and their orientation. The maps had an approximately 6 nm resolution. 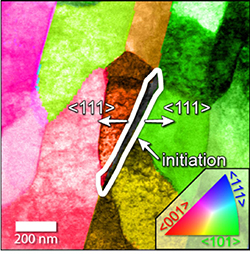 A Sandia National Laboratories transmission electron microscope helped create this phase equilibrium map showing areas where corrosion of steel was observed at the triple junction formed where one cementite grain abuts two ferrite grains. Source: Sandia National LaboratoriesBy comparing these maps before and after the liquid corrosion experiments, a direct identification of the first phase that fell out of the samples could be identified. They essentially identified the weakest link in the internal microstructure. The sample that was analyzed was considered to be a low-carbon steel, but it had relatively high-carbon inclusions of cementite, which are the sites of localized corrosion attacks.

Localized corrosion is different from uniform corrosion, the researchers said. The latter occurs in bulk form and is highly predictable. The former is invisible, creating a pathway observable only at its endpoint and increasing bulk corrosion rates by making it easier for corrosion to spread.

“A better understanding of the mechanisms by which corrosion initiates and progresses at these types of interfaces in steel will be key to mitigating corrosion-related losses,” the paper said.

The work was funded in part by Sandia’s Laboratory Directed Research and Development program. The Center for Integrated Nanotechnologies is a DOE Office of Science user facility operated by Sandia and Los Alamos national laboratories for university, industry and other national lab researchers.

By posting a comment you confirm that you have read and accept our Posting Rules and Terms of Use.
Advertisement
RELATED ARTICLES
Nuclear waste disposal materials prone to fast corrosion
Anti-corrosive coating developed for steel used in maritime applications
Engineer's Guide to Corrosion: Part 1
7 Forms of Piping Corrosion and How to Prevent Them
Multilayer coating extends the lifetime of steel
Advertisement