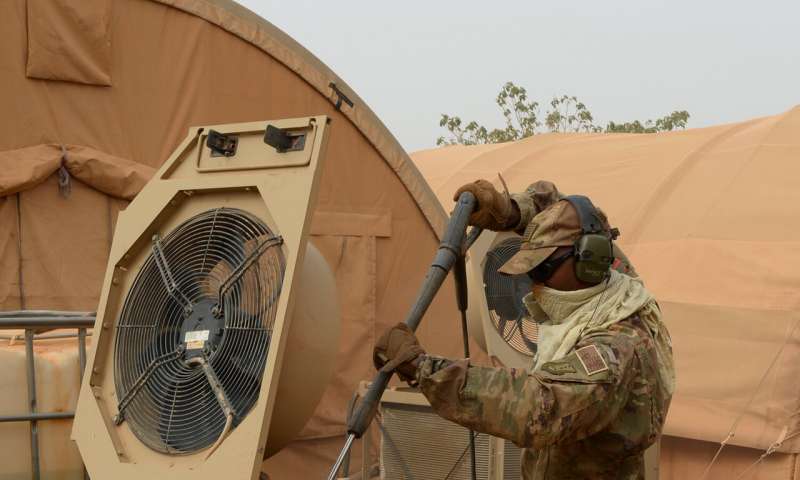 A heating, ventilation and air-conditioning (HVAC) unit gets a cleaning at an Air Force base in Nigeria. Source: Jimmie Pike/U.S. Air ForceEditor's note: The number of blends, the breakdown of nonflammable and marginally flammable blends and the percentage of GWP reductions were updated on July 15, 2019, to correct for a discrepancy between the numbers reported by NIST and the numbers in the published study. When asked about the difference, one of the study authors, Ian Bell, responded, "To be fair, there is little to differentiate the mixtures we selected, and we could have selected more or fewer blends without changing the top-line conclusions."

The National Institute of Standards and Technology (NIST) has been searching for a better refrigerant — one that doesn't heat the atmosphere as much as those currently in use and doesn't catch fire yet still meets performance standards. Following a multi-year study released in 2017 that found no clear winners, NIST's recent analysis explored chemical blends. While none met all the required constraints, the researchers identified some promising alternatives.

Global warming potential (GWP) that is lower than that of R-134a (tetrafluoroethane), the current standard refrigerant used in vehicle air conditioning, was one of the primary factors considered. GWP is a measure of the heat a gas will trap if released into the atmosphere. The other desired characteristics were nonflammability, high efficiency (cooling per unit of work) and overall cooling capacity comparable to R-134a, which represents the baseline.

The study selected 13 fluids that are low in toxicity, commercially available and within a specified range of pressure, flammability and GWP. The fluids were then extensively evaluated in all possible combinations of two or three to find the optimal blend. Hydrofluoroolefins were chosen for their very low GWP, but they are mildly flammable. Also included were nonflammable hydrofluorocarbons (HFCs) with moderate-to-high GWP, mildly flammable HFCs and carbon dioxide, which is nonflammable and has a very low GWP but would raise the operating pressure of a blend. Most of the blends included R-134a.

The researchers used computational tools to simulate the performance of 23 blends in a refrigeration cycle model. Sixteen nonflammable blends had reduced GWP, up to 54% compared to R-134a. Seven marginally flammable blends reached GWP reductions up to 99%.

NIST reported that GWP and flammability increased with efficiency. "The ‘good’ blends that we found are very borderline nonflammable,” NIST mechanical engineer and study lead author Ian Bell said. “That doesn’t mean that they won’t still burn given the right environment. We need to be cautious, because this is sort of a dark art. There is a fundamental trade-off: If you really want nonflammability and efficiency, you won’t get both. You will get one or the other.”

Laboratory experiments will be conducted to verify the model results. The study, supported by the U.S. Department of Defense, was conducted for the U.S. military but also has civilian applications such as air conditioning systems for homes and cars.

The study is published in ScienceDirect.

By posting a comment you confirm that you have read and accept our Posting Rules and Terms of Use.
Advertisement
RELATED ARTICLES
Low GWP Refrigerants - Understanding GWP, GHG, ODP and Climate Change
What is the ideal refrigerant?
Limited Options for HFC Replacements
New non-flammable replacement for R-410A refrigerant
An eco-friendly refrigerant for supermarkets
Advertisement