A 2017 explosion and fire aboard a barge off the Texas Gulf Coast was the result of a lack of effective maintenance and safety management, the National Transportation Safety Board said.

The October 2017 explosion aboard the articulated tug and barge (ATB) Buster Bouchard/B No. 255 was caused by the ignition of flammable vapor that formed in a void space. The vapor was from crude oil that leaked into the space from a cargo tank through a corroded bulkhead. 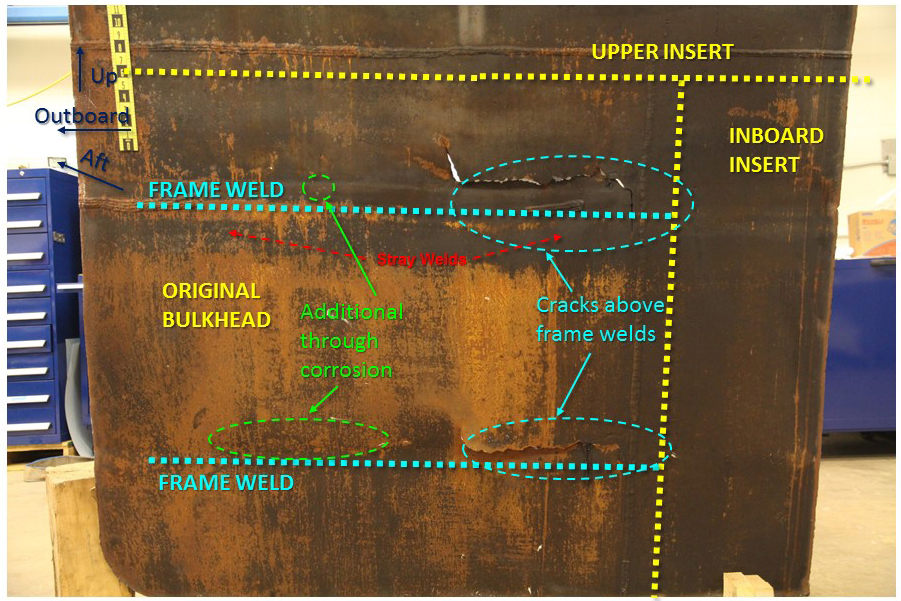 Illustration showing the cargo tank side of the bulkhead section.The photo has been markedto show areas of replaced/inserted steel, the two cracks, and two additional areas of through-corrosion. Source: NTSBTwo barge crew members who were on the bow were killed in the explosion. About 2,000 barrels of crude oil were discharged into the water or were consumed in the fire.

An ATB consists of an independent tugboat, acting as a detachable power module, that is connected by a rack and pinion into the stern notch of a cargo-carrying barge designed to fit the tugboat. When connected, the tugboat and barge operate and navigate as a single unit. The ATB in this accident included the tugboat Buster Bouchard and the tank barge B. No. 255.

NTSB investigators documented cracks in the area of the original bulkhead that were not repaired prior to the explosion. These cracks compromised the integrity of the cargo containment of the number one port tank. 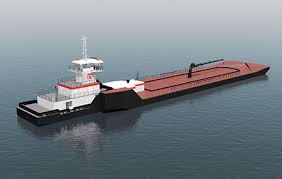 A typical ATB configuration. Source: CumminsAt around 4:30 a.m., the mate on watch in the Buster Bouchard wheelhouse and the two barge crewmembers prepared to raise the anchor on the bow. In order to raise the anchor, the barge crew had to start one of the barge’s diesel generators and switch the source of electrical power from the tugboat to the barge. Once electrical power was switched, the barge’s crew moved to the bow.

A small enclosure located on the bow, referred to as the “doghouse,” provided access to a stairway down to the forepeak. A crew member opened the door and reached into the doghouse to retrieve the anchor windlass controller. He returned to the vicinity of the windlass, started it, and began hauling in the anchor.

At the same time, the tugboat’s assistant engineer started the main engines, and then the mate checked the running lights and steering and awaited maneuvering directions from the barge captain.

The mate, who was facing to port in the tugboat’s wheelhouse, saw a flash out of his peripheral vision. As he looked forward, he saw blue flames on the bow around the area of the winch. The flames were immediately followed by an explosion. The mate sounded the tugboat’s general alarm and attempted to call the barge crew on a handheld radio. He received no answer, and he could no longer see the two crew members on the bow. 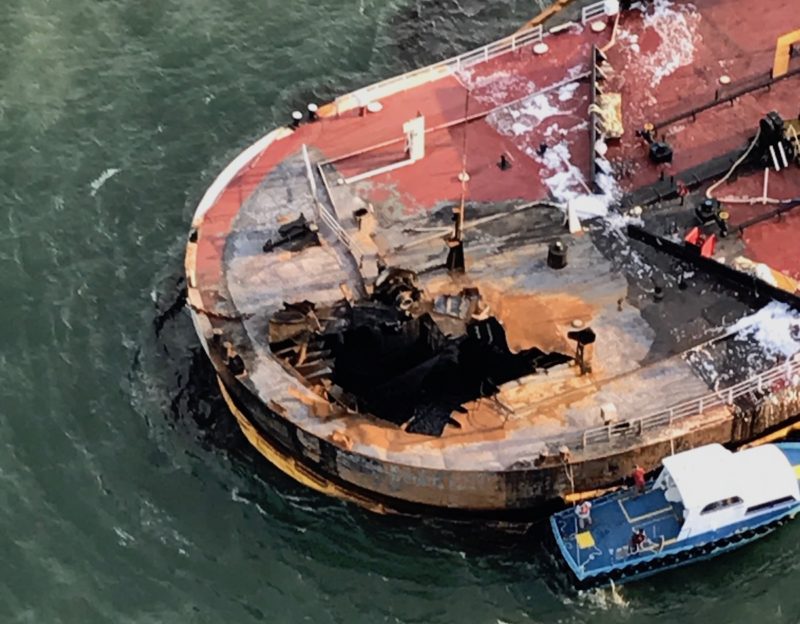 Damage to the barge's bow section caused by the explosion. Source: NTSBA second and third explosion followed, and a fire erupted in the area of the explosions. The crew of the Buster Bouchard, fearing further explosions, disengaged the tugboat from the damaged barge. After disengaging, the tugboat’s crew initiated a search for the missing barge crew.

During a postaccident examination of the barge, NTSB investigators discovered two horizontal through-cracks in the bulkhead separating the forepeak and the no. 1 port cargo tank. The cracks were around 15 ft from the bottom of the tank and about two inches above transverse framing welded to the forepeak side of the bulkhead. The cracks were more than 13 in long. A 3-ft-by-4-ft section of the bulkhead containing the cracks was removed for examination and testing by the NTSB Materials Laboratory.

During the laboratory examination, the inboard, lower and upper areas of the bulkhead section were found to be newer steel consistent with repairs noted in official records. The central portion of the bulkhead section, which contained the two cracks, was older steel. This steel was pock-marked and pitted on the forepeak side of the bulkhead, and the metal was corroded and thinned in the areas around the cracks. Two additional areas of through-corrosion, located outboard of the cracks, were discovered during the laboratory examination.

In addition to the forepeak/no. 1 port cargo tank bulkhead cracks, investigators found several areas of material wastage and corrosion on the main deck of the barge. The wasted areas were determined by the Coast Guard to predate the accident.

Investigators also discovered epoxy compound that was used to fill in wasted areas in various locations on the cargo deck (main deck) plating as a temporary repair. These repairs were not approved by the Coast Guard or by the American Bureau of Shipping (ABS). Other similar repairs had been previously identified on deck enclosures by ABS in March 2017, but were allowed to remain until the next shipyard period in February 2018.

The NTSB report said the initial explosion originated in the barge's forepeak. Two through-cracks and other holes in the bulkhead between the forepeak and the no. 1 port cargo tank on the barge were primarily a result of corrosion that existed prior to the accident. These compromised the integrity of the cargo containment in the no. 1 port tank.

The explosion in the forepeak of the barge was caused by the ignition of flammable vapor that formed from oil that had leaked into the space from the no. 1 port cargo tank through a corrosion-compromised bulkhead. The NTSB said that Bouchard Transportation’s safety management system and maintenance processes failed to ensure proper maintenance of the company’s fleet of barges, including the B No. 255.

The NTSB’s report also noted U.S. Coast Guard inspectors who examined the barge prior to the accident failed to identify the unsafe condition. It also said that the ABS failed to act on its surveys that highlighted discrepancies regarding the substandard maintenance and hazardous conditions of B. No. 255.

Based on the findings of its investigation, the NTSB issued safety recommendations seeking the establishment of joint policy and procedures to share information including results and findings from audits, surveys, examinations, inspections and all other applicable activities related to vessel safety.

By posting a comment you confirm that you have read and accept our Posting Rules and Terms of Use.
Re: Corrosion and faulty repairs led to fatal explosion, NTSB says
#1

Re: Corrosion and faulty repairs led to fatal explosion, NTSB says
#2
In reply to #1
DinosaurDad

You are close. Code of Federal Regulations have 42 gallons of oil is one barrel which is 5.67 million gallons. I board these vessels all the time. Interesting pieces of equipment and they are generally dangerous depending upon the product. Got to keep your head but these double hull vessels have void spaces that need to be "sniffed" for vapors routinely or the above will happen.