The Japanese Aerospace Exploration Agency (JAXA) recently published grainy footage depicting the jettison of a kinetic projectile from the Hayabusa2 spacecraft toward the surface of asteroid 162173 Ryugu. In early April, the projectile impacted the asteroid regolith to expose rich organic chemical samples that will be returned to Earth for study.

Asteroid Ryugu is a carbonaceous, near-Earth asteroid with a minimum orbit intersection distance of 0.23 lunar distance. Scientists expect that it contains samples of organic compounds, minerals and sediment that are older than the Earth, which will help identify how the planet was formed and the solar system has changed.

The footage shows the release, but not the impact, of the Small Carry-on Impactor, which is a 5.5 lb copper slug fired by Hayabusa2 from 500 m, propelled by 9 lb of high-melting explosive. The projectile impact will create a crater and reveal materials that have been less exposed to space weathering than those on the asteroid surface. 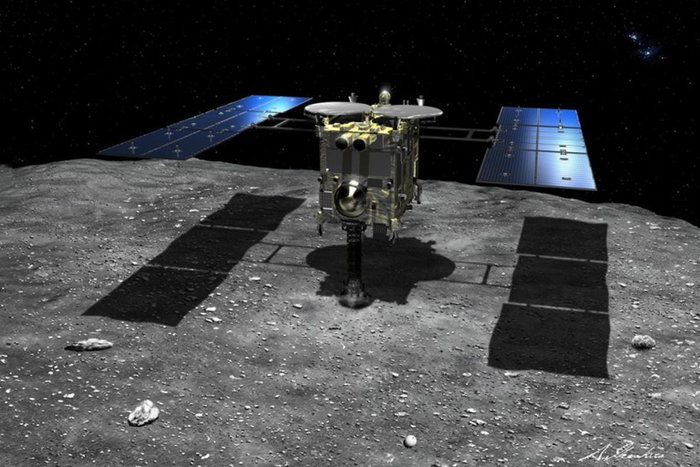 JAXA expected the sample to be retrieved on April 25, although the agency has heeded caution for previous sampling procedures as it is a risky maneuver. The first sampling attempt was delayed from October 2018 until February; a second sampling attempt was also postponed and has yet to be rescheduled. Hayabusa2 was also supplied four small rovers, two of which have been already deployed to help find and analyze sample sites.

The spacecraft was launched in December 2014 and arrived at Ryugu in June 2018. Hayabusa2 will spend about a year-and-a-half surveying and sampling the asteroid. Thereafter, it will fly past Earth solely to deliver the Ryugu samples via parachute canister, and then be redeployed to another asteroid or auxiliary mission.

Hayabusa2 was inspired by the original Hayabusa mission, which delivered samples from asteroid 25143 Itokawa to Earth in 2010.

By posting a comment you confirm that you have read and accept our Posting Rules and Terms of Use.
Advertisement
RELATED ARTICLES
NASA's Asteroid-Sampling Probe Reaches Target
Spacecraft Will Snatch a Piece of an Asteroid and Return it to Earth in Daring Maneuver
NASA awards SpaceX a contract to crash a spacecraft into an asteroid
Watch: NASA spacecraft samples asteroid Bennu
Watch NASA news: Asteroid Bennu is disturbed; Return to the moon with SpaceX
Advertisement