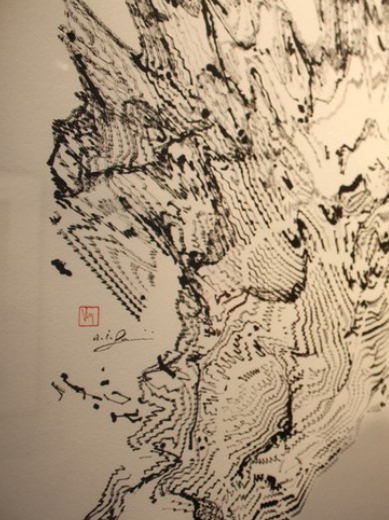 Artist Victor Wong spent three years building and programming the robot called A.I Gemini, teaching it artistic techniques along the way. Wong built randomness into the AI, which means that Wong has no idea what the end product will be before A.I Gemini begins painting.

As part of Wong’s exhibition called “Far Side of the Moon,” A.I Gemini was fed NASA 3D images of the moon as well as images captured by China's Chang'e-4 lunar rover of the dark side of the moon earlier this year. The result was a series of moonscapes painted in the style of the ancient Chinese art of Shuimo, which uses black ink and water.

According to reports, it takes A.I Gemini 50 hours to create one piece of artwork, which, on average can sell for as much as $13,000. Currently, Wong’s exhibition is on display at the 3812 Gallery in London.

As advances in technology continue, it is likely that AI will make inroads in areas normally dominated by humans and that includes the creative industry — an industry previously thought to be safe from a technological takeover. However, artificial intelligence is increasingly being found throughout the art and literary worlds. In 2018, artwork created by AI sold at Christie’s auction house in New York City for $432,000 and a team from the U.K.-based company Engineered Arts is currently developing an AI robot that will be capable of drawing portraits. Similarly, an AI algorithm was recently signed to a record deal with Warner Music Group for its AI-generated albums, while artists and developers from Botnik Studios created the world’s first AI-written fairy tale.

By posting a comment you confirm that you have read and accept our Posting Rules and Terms of Use.
Advertisement
RELATED ARTICLES
Cave of plastic built to highlight plastic pollution issue
Thanks to AI, Salvador Dalí will live again
Photographer builds 11 ft wave of plastic straws to raise awareness about plastic pollution
AI builds sculpture using the remains of the computer used to design it
Woman turns plastic grocery bags into outfit
Advertisement