Researchers at the University of Warwick have used the movement of trembling Aspen leaves to devise an energy harvesting mechanism.

The team investigated whether the underlying mechanisms that produce low-wind-speed quiver in Aspen leaves could efficiently and effectively generate electrical power by exploiting the wind-generated mechanical movement of a device modeled on the leaf. 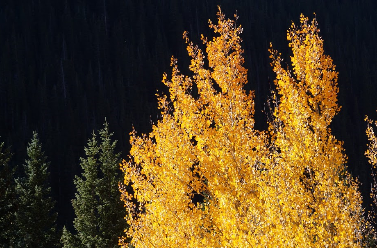 Aspen in the James Peak Wilderness, Colorado. Source: David WagmanThe mechanism provides a mechanical means of generating power without the use of bearings, which can stop working in environments with extreme cold, heat, dust or sand. The amount of potential power that could be generated is small, but still could power autonomous electrical devices, such as those in wireless sensor networks. These networks could be used for applications such as providing automated weather sensing in remote and extreme environments.

The key to Aspen leaves' low wind but large amplitude quiver relates to the stem's essentially flat shape. The researchers used mathematical modeling to come up with a mechanical equivalent of the leaf. They then used a low-speed wind tunnel to test a device with a cantilever beam like the flat stem of the Aspen leaf, and a curved blade tip with a circular arc cross-section acting like the main leaf.

The blade was then oriented perpendicular to the flow direction. That allowed the harvester to produce self-sustained oscillations at low wind speeds like the Aspen leaf. The tests showed that the air flow becomes attached to the rear face of the blade when the blade's velocity becomes high enough.

The researchers said that in nature, the propensity of a leaf to quiver is enhanced by the thin stem's tendency to twist in two different directions. However, the modeling and testing found that the researchers did not need to replicate the additional complexity of a further degree of movement in their mechanical model. Simply replicating the basic properties of the flat stem in a cantilever beam and curved blade tip with a circular arc cross-section acting like the main leaf was enough to create sufficient mechanical movement to harvest power.

The researchers said they will next examine which mechanical movement-based power-generating technologies would best be able to exploit this device and how the device could best be deployed in arrays.

I wonder what birds would think of it.

There's not a whole lot of energy here, but it may be enough to power some devices at a location remote from a source of power.

There are various theories of why Aspen leaves shake. There must be some advantage that drove evolution in that direction. My favorite theory is that the shaking ejects insects.

Re: Harvesting energy by mimicking Aspen tree leaves
#4
In reply to #2
artsmith

I would have thought it would make it hard for a butterfly to land... apparently not though, they are as popular with lepidoptera as they are with browsing animals.

I read further and saw that the "leaf" design doesn't look like leaves or anything attractive to animals. Which is a good thing IMO (not that there are birds on Mars!).

As for the real aspens, I wonder if the trembling leaves provide extra camo for birds? That would be a plus especially if there are lots of caterpillars to eat.

I'm not sure that 'natural selection' can be invoked to explain the trembling. Features which emerge randomly are conserved as long as they aren't markedly disadvantageous, and simply contribute to diversity which helps to ensure that a tree of some kind, any kind, will survive a particular environment or severe challenge.

OTOH I wondered if the quivering leaves could affect the aerodynamics of seed dispersal in any way. Low seed viability and short window for germination is a defect in the aspen, which is compensated by sprouting from the roots. Flowering and pollination happens before leaves are out, but it seems the leaves are close behind and are open by the time those delicate seeds are ready to disperse... It's not impossible that quivering leaves affect disperal pattern of those seeds in a way that is advantageous - and that would tick the natural selection box.

Energy generated by tree leaves is getting attention from multiple researchers:

Plants Can Generate Electricity from the Wind

And fake leaves might help scrub CO2 from Earth's atmosphere:

Re: Harvesting energy by mimicking Aspen tree leaves
#5
In reply to #3
artsmith