Space batteries have been overheated, short-circuited and otherwise tested to destruction in test bunkers of 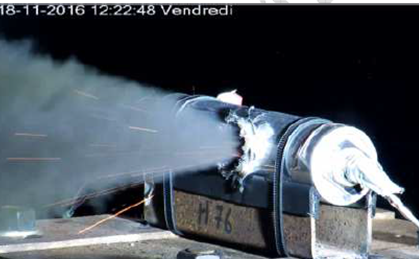 An 8 mm bullet was fired into a space battery cell to simulate a micrometeroid impact. Source: ESA/AirbusFrance’s Alternative Energies and Atomic Energy Commission. The goal is to assemble guidelines on how to keep end-of-life batteries safely inactive and eliminate satellite breakups. Ten of the known 250 orbital satellite destruction events are attributed to battery failure, and ESA estimates that there are about 750,000 pieces bigger than 1 cm (0.4 in.) in orbit, a number that could grow to about 1.2 million by 2030.

Over 200 destruction tests have been completed on battery cells and multiple-cell modules, including new devices and others artificially aged by repeated charging/discharging. High temperature, overcharging and other test protocols have been augmented by simulated micrometeoroid strikes by use of 8 mm bullets.

The agency recommends that batteries on decommissioned satellites should be completely discharged and disconnected from the solar panels before retirement, and that the craft should be configured to keep the batteries at as even a temperature as possible.

International guidelines recommend that operators remove spacecraft from low-Earth orbit within 25 years from the end of the craft's mission, but only 60% of missions currently comply.

By posting a comment you confirm that you have read and accept our Posting Rules and Terms of Use.
Advertisement
RELATED ARTICLES
Video: Removing Derelict Satellites and Other Space Debris
Cleaning Up Space Debris
Video: First mission planned to collect space debris
Tiangong-1 Space Station Expected to Crash Back to Earth this March
Soaring through space on solar sails
Advertisement