The future of climate in 540 North American cities 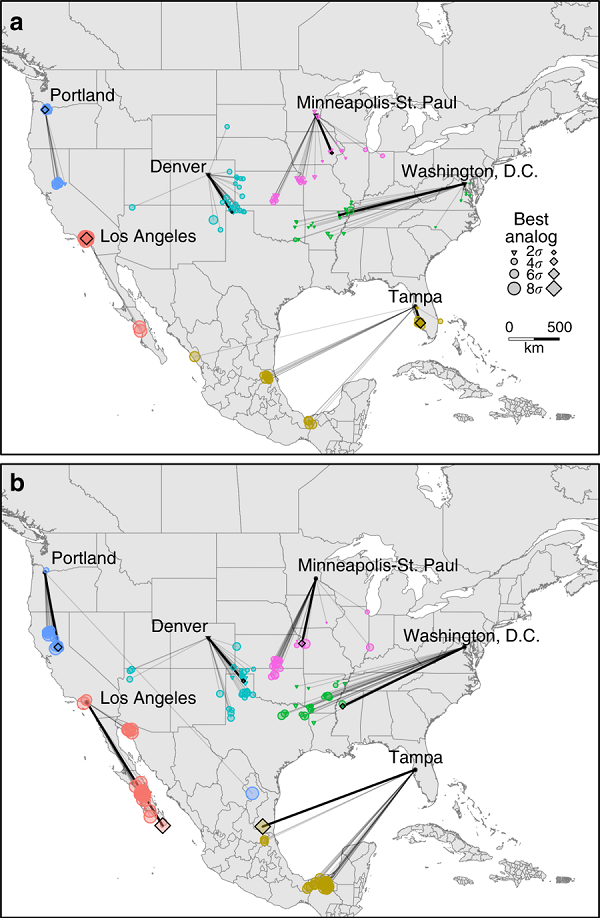 The impact of climate change for city dwellers is the focus of a study conducted by University of Maryland and North Carolina State University researchers. The researchers project that in one generation, the climate experienced in many North American cities will change to that of locations hundreds of miles away, or to a new climate unlike any currently found on the continent. A climate-analog analysis matches the expected future climate in each of 540 urban areas with the current climate of another location, providing a relatable picture of what is likely in store by 2080.

The similarity between each city's future climate expected by 2080 and contemporary climate in the Western Hemisphere north of the equator was mapped. Twelve measures of climate, including minimum and maximum temperature and precipitation during the four seasons, were considered. Climate differences under two emission trajectories were analyzed: unmitigated emissions, a trend most in line with what might be expected given current policies and the speed of global action, and mitigated emissions, which assumes policies are implemented to limit emissions, such as the Paris Agreement.

The analysis indicates that even if limits are placed on emissions, the climate of North American urban areas will feel substantially different, and in many cases completely unlike climates found anywhere in the northwestern part of the globe.

An associated interactive web application was designed to communicate how climate change may impact the lives of a large portion of the population of the U.S. and Canada.

The research is published in Nature Communications.