Tree Seeds May Offer an Effective Way to Treat Water

Researchers from Pennsylvania State University are working to understand if the seeds of the Moringa oleifera tree could be the solution to clean drinking water.

The tree grows throughout many tropical and subtropical regions of the world, and is already used as a food source. Researchers say that something in the tree’s seeds has the ability to kill bacteria and clarify water.

“That has been known for some time,” says Stephanie Butler Velegol, environmental engineering instructor at Penn State. Women in ancient Egypt 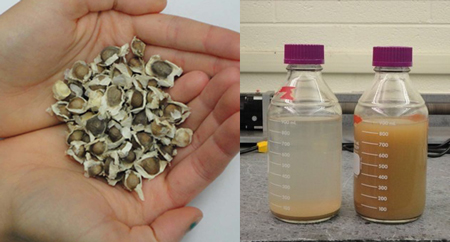 Bottles of turbid, contaminated water with the left one treated with crushed Moringa seeds. Source: Penn Statereportedly rubbed Moringa seeds on clay water pots, and dried powder from crushed seeds has been used as a handwash for many years.

Recently, the water-clarifying ability of Moringa powder was discovered to be caused by a positively-charged protein called the Moringa Oleifera Cationic Protein (MOCP). When the seeds are crushed and added to water, this protein will kill some of the microbial organisms and cause them to clump together and settle to the bottom of a container.

Researchers say that the organic matter remains in the water after purification and provides a food source to any bacteria that have not been killed. Therefore, water treated with the Moringa seed does not stay safe to drink after some time in storage.

The study showed the mechanism by which MOCP turns polluted water into clean drinking water. However, there remain unanswered questions that researchers are working to solve. One is which type of seeds is most efficient in water clarification. Researchers say that leaves and seeds harvested during different seasons differ in nutrient content. The researchers do not know, however, if this affects the seed’s ability to clean water.

“One of the biggest challenges in using Moringa seeds for cleaning water is that people don’t know which seeds work and don’t work,” Velegol says.

The researchers teamed up with Bashir Abubakar, a botanist from Ahmadu Bello University in Zaria, Nigeria, to test four different kinds of seeds of different maturity and harvest times. Researchers were able to study their mass, oil content and ability to kill bacteria and clarify water.

By posting a comment you confirm that you have read and accept our Posting Rules and Terms of Use.
Advertisement
RELATED ARTICLES
Team devising a DIY approach to coating masks
Team creates method to separate mucilage from chia seeds
Common Lawn Nuisance Has Value as Laboratory Pipette
Coating promises to protect seeds from water shortages
Sweet Approach to Water Disinfection?
Advertisement