Unraveling the terrestrial origins of a moon rock

When is a moon rock not a moon rock? When results from secondary-ion mass spectrometry trace element analyses suggest the felsite clast sample collected by Apollo 14 astronauts in 1971 is of terrestrial origin.

An international research team has determined that the lunar sample, on loan to Australia’s Curtin 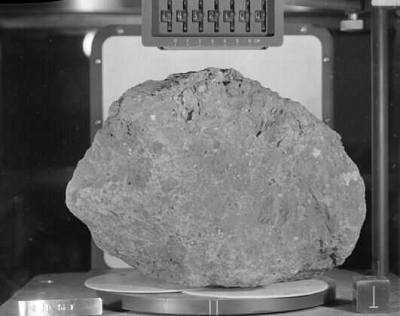 A lunar rock retrieved by the Apollo 14 mission. Source: NASAUniversity from NASA, contains a fragment of Earth's ancient crust, dating back more than four billion years.

The chemistry and age of the zircon constituents — plus the presence of quartz, which is a rare component of lunar rocks — are indicative of formation conditions not found on the moon but common on Earth. The zircons formed in far colder, oxygen-rich magmas than the moon typically has.

The researchers theorized that the rock crystallized on Earth at a depth of 19 km in the continental crust and was ejected from the planet perhaps as the result of an asteroid impact. It was then trapped in the unconsolidated rocky material covering bedrock on the lunar surface, where it remained until collected by Apollo 14 astronaut Alan Shepard on Feb. 6, 1971.

By posting a comment you confirm that you have read and accept our Posting Rules and Terms of Use.
Advertisement
RELATED ARTICLES
NASA selects Firefly Aerospace to deliver 10 experiments to the moon
The Moon May Be Older Than We Thought
NASA and JAXA Find Moon Tunnel Ideal for First Moonbase
Beresheet has moon landing in its sights
Watch: First unified geologic map of the moon is released
Advertisement