The US made big strides towards clean, independent energy in 2018 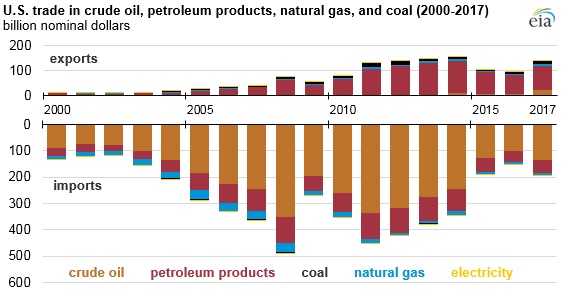 On Feb. 5, 2018, the EIA reported China surpassed the U.S. as the largest importer of crude oil in 2017. On average China imported 8.4 million barrels per day (b/d) in 2017. This toppled U.S. net imports of 7.9 million b/d. Increased refinery capacity and dwindling domestic production largely contributed to China’s net import of crude oil, but domestic production of crude oil in the U.S. continues to rise in large part due to the drilling of vertical wells and hydraulic fracturing.

On March 27, the EIA reported that liquefied natural gas (LNG) exports had quadrupled in 2017. LNG exports rose to 1.94 billion cubic feet per day (Bcf/d). There have been a series of LNG projects completed since 2016 and with even more slated for 2019, such as the Freeport LNG and Corpus Christi LNG in Texas, U.S export capacity is expected to reach 9.6 Bcf/d by the end of 2019.

On Oct. 29, the EIA reported that domestic electric power sector carbon dioxide (CO2) emissions had declined 28% since 2005, due to slow demand coupled with a new mix of fuel sources. The retirement of coal-fired power plants was displaced by natural gas-fired power generation and the net effect was a decreased carbon footprint for the U.S. electric power sector, which released just 1,744 million metric tons (MMmt) of atmospheric CO2 in 2017, the lowest level since 1987.

The EIA began 2019 by recognizing that the U.S. became the world’s largest crude oil producer in 2018. Forecasted U.S. crude oil production came in at 10.9 million b/d for 2018. Crude oil exports increased significantly and the U.S. is forecasting an average of 1.9 million b/d in 2018. The EIA also recognized the U.S. as a net exporter of crude oil for a one-week period in late November, a feat never documented through-out all of the EIA’s data history, which began in 1994.

Re: The US made big strides towards clean, independent energy in 2018
#1

Why do we export oil when we import oil? Are foreign governments willing to pay a higher price than what it can be sold for domestically? Why don't they buy it from Canada or some other country at a lower price?

Re: The US made big strides towards clean, independent energy in 2018
#2
In reply to #1
Dennis R. Levesque

Ever hear of money laundering? Maybe someone is "laundering" oil to one of our allies.

Re: The US made big strides towards clean, independent energy in 2018
#3
In reply to #2
PAPADOC

You may be right. I remember the Iran-Contra Affair under President Reagan who secretly supported an anti-Communist group in Nicaragua and funneled weapons to Iranian terrorists in exchange for American hostages.

Re: The US made big strides towards clean, independent energy in 2018
#4

The US primarily exports refined petroleum products and imports heavy oil sands from Canada. It is a valuable feedstock that is blended with light sweet crude oil in order to generate more revenue.

Re: The US made big strides towards clean, independent energy in 2018
#5
In reply to #4
Dennis R. Levesque

Also, maybe others prefer the quality controls that comes from US plants.