The highest level of adoption will be in high-fuel consuming applications such as trucks and ships. 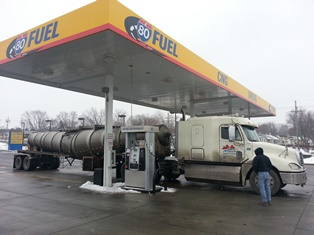 A truck running with natural gas. Image source: wikipedia.orgThe study says that worldwide oil consumption in trucks is almost as high as in cars but notes that it is often more economic for truck fleets to switch to alternative fuel sources. Fleets have a relatively quick turnover, leading to early adoption of new technologies.

While the growth outlook for gas demand in fuel is strong globally, the study does find big differences between drivers and outcomes in key regions. However, in all regions the tax treatment of fuels will be critical in determining consumer choice, especially as oil prices fluctuate. The study says that a minimum level of fueling infrastructure is essential to jumpstart adoption.

By posting a comment you confirm that you have read and accept our Posting Rules and Terms of Use.
Advertisement
RELATED ARTICLES
Texas LNG export terminals near commercial startup
As Japan restarts its nukes, LNG imports fall
Where does U.S. natural gas come from, and where does it go?
LNG Milestone as Ship Sails from Gulf Coast Terminal
Gas production set for 30-year growth trend, EIA says
Advertisement