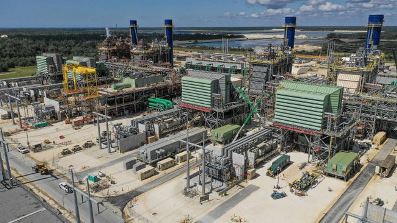 The new gas-fired generating units at the Crystal River site in Florida. Source: Duke EnergyDuke Energy broke ground on the project in March 2016. Fluor was the engineering, procurement, construction contractor on the project. The new station replaces electric power from two 1960s-era coal-fired units and a nuclear plant.

About 50 permanent workers will operate and maintain the new power plant.

The utility said that sulfur dioxide, nitrogen oxides and other emissions are expected to drop by 90% in comparison to the operation at Crystal River coal-fired units 1 and 2. Duke Energy announced its decision in 2014 to retire those units due to federal environmental regulations. The coal-fired units will formally retire in December, and the demolition process is expected to last through 2023.

In February 2013, Duke Energy announced its decision to retire the 800 MW Crystal River nuclear plant instead of pursuing a first-of-its-kind repair to the plant’s containment building. While replacing two steam generators during a scheduled maintenance and refueling outage in 2009, engineers discovered a delamination, or separation of concrete, within the containment building that surrounds the reactor vessel. Crews repaired the damage, but additional concrete separations were discovered in two different areas of the containment building in 2011. The plant entered service in 1977. Its decommissioning process could extend until 2074.

By posting a comment you confirm that you have read and accept our Posting Rules and Terms of Use.
Advertisement
RELATED ARTICLES
Pilgrim closes and Crystal River looks to speedy decommissioning
Coal Use Falls as Power Sector Shifts to Gas
Gas-fired power plants are getting bigger, EIA says
Duke Energy Plans to Build a 650 MW Gas-fired Power Plant
Duke Energy Offers Truck Stop Plug-in Kiosks
Advertisement