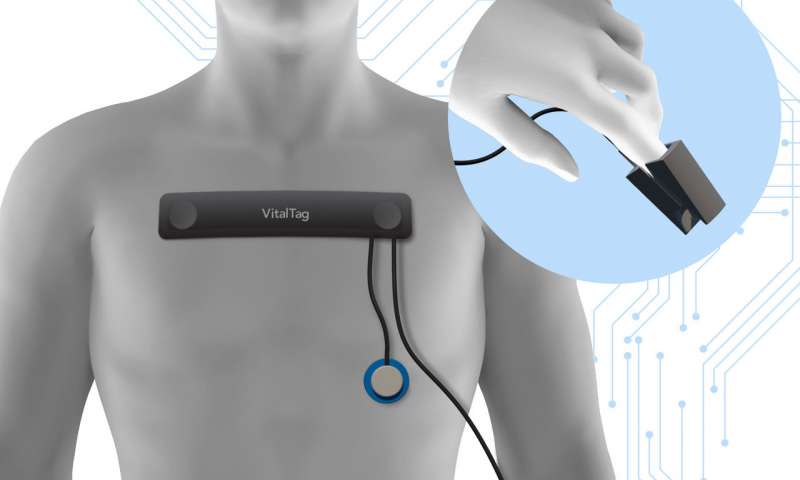 VitalTag will keep first responders connected to their patients via a suite of sensors and a mobile app. Source: PNNLDetermining who to treat first in a mass casualty scenario, be it shootings, multiple car pile-ups or natural disasters, often overwhelm first responders faced many victims all needing treatment at once.

Researchers from the U.S. Department of Energy’s Pacific Northwest National Laboratory (PNNL) have developed an adhesive sensor capable of measuring and tracking a patient's vital signs, informing first responders of those who need immediate treatment and possible transport, quickening the pace at which they conduct triage.

The patent-pending suite of sensors, called VitalTag, monitor and wirelessly transmit vital sign measurements such as heart rate, blood pressure and respiration rate, along with other metrics such as shock index, blood oxygen levels and other data generated from a single-lead electrocardiogram. In a mass casualty scenario, first responders would view each victim’s vital signs on an incident map, receiving an alert if those measurements worsen. To work, the stick-on sensor is fixed to a patient’s sternum and via Wi-Fi transmits real-time patient data to mobile devices or laptops.

Said Gosink, "With VitalTag, many more patients can be monitored simultaneously and continuously. More situational awareness, like that achieved with VitalTag, can result in better patient outcomes."

Although still in development, researchers envision a number of applications for the technology beyond triaging a mass casualty scenario. Among those applications, the sensors could monitor veterinary medicine, military warfighters and high-performance athletes.

VitalTag is just one in a number of wearable devices for medical applications. It joins recently developed technologies such as soft contact lenses embedded with electronics for the purpose of drug delivery, as well as wearable UV sensors to measure a person’s sun exposure.

By posting a comment you confirm that you have read and accept our Posting Rules and Terms of Use.
Advertisement
RELATED ARTICLES
Artificial Intelligence Developed to Help First Responders
Stress research could help first responders stay healthy
Video: A drone to monitor emissions from marine vessels. A breakthrough device to track first responders. And even the most novel design ideas wind up in the trash bin. We’ll show you why.
POINTER: Enhancing Safety for First Responders
Durable sensors produced using nanotech, 3D printing
Advertisement