China’s Experimental Advanced Superconducting Tokamak (EAST) reactor has exceeded 100,000,000° C, setting a new record in fusion technology. The temperature, attained during the four-month test conducted at Hefei Institutes of Physical Science of the Chinese Academy of Sciences (CASHIPS), is about seven times hotter than the interior of the Sun. 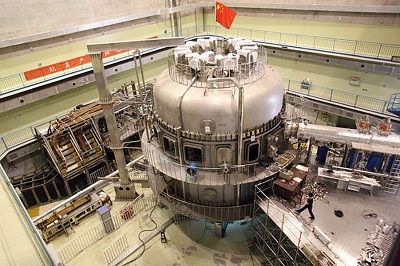 The superconducting tokamak achieved a fully non-inductive, steady-state scenario with extension of fusion performance at high density, high temperature and high confinement. Data documented during experiments with China’s "artificial sun" validate heat exhaust, transport and current drive models, and fine-tune fusion performance predictions for the Chinese Fusion Engineering Test Reactor. This third-evolution machine is being designed with a toroidal magnet field of 6.5 to 7 Tesla and a plasma current of 13 MA.

By posting a comment you confirm that you have read and accept our Posting Rules and Terms of Use.
Re: China's Artificial Sun Reaches 100,000,000° C
#1

"This resulted in power injection greater than 10 MW "

But did it output more than was input? Nothing was clear on that point.

"Seven times hotter than sun" - is that necessary?