One of the two reactors aboard Russia's first floating nuclear power plant, Akademik Lomonosov, has achieved 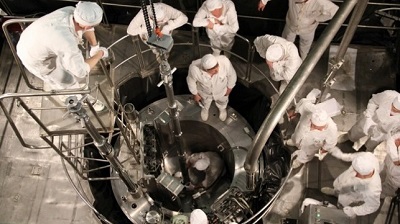 Technicians loading the first reactor aboard the Akademik Lomonosov, Russia's floating nuclear power plant. Source: Rosenergoatoma sustained chain reaction for the first time. The second reactor will be started up and tests will be carried out before the plant is towed to Pevek next year.

The loading of fuel into the two 35 MWe KLT-40S reactors aboard the floating plant began on July 24 and completed on October 2. Operator Rosatom said that once in operation the facility will be both the world's only operational floating nuclear power plant and the northernmost nuclear installation. Akademik Lomonosov will replace the Bilibino nuclear power plant and the Chaunskaya thermal power plant, which are both being retired. The first Bilibino unit is scheduled to be shut down next year and the whole plant will be shut down in 2021.

The 144 m long, 30 m wide vessel left the Baltiysky Zavod Shipyard on April 28 and arrived in Murmansk on May 17 after having been towed over 4,000 km through the Baltic, Northern, Norwegian and Barents Seas.

Re: First Nuclear Reactor on Russia's Floating Plant Starts Up
#1

What happens to the spent rods?

The disposal of the spent rods is the biggest safety hazard of nuclear power.

Re: First Nuclear Reactor on Russia's Floating Plant Starts Up
#2

Improper Behavior: This post was deleted because it did not adhere to the behavioral policies of the site. Please review Section 14 of the CR4 Site FAQ and the Rules of Conduct.

Re: First Nuclear Reactor on Russia's Floating Plant Starts Up
#3
In reply to #2
PAPADOC

What is the behavioral problem?

Re: First Nuclear Reactor on Russia's Floating Plant Starts Up
#4

This is the Craziest power plant idea a floating disaster waiting to happen !!!!!!!!!!!!!!!!! Leave it to the commies