Following the 3,565 megawatts (MW) of wind-generating capacity installed across the U.S. during the fourth quarter of 2014, the first quarter of 2015 saw a drop, with 533 MW installed. That was in line with the 532 MW of generating capacity installed in last year’s first quarter. The U.S. has 8,217 MW of wind capacity currently under construction. All of it is slated to be completed by the end of 2016, reports SNL Financial.

Of the wind farms brought into service in the first quarter of 2015, the 205-MW Bison 4 Wind Farm in Oliver County, N.D. was the largest. Minnesota 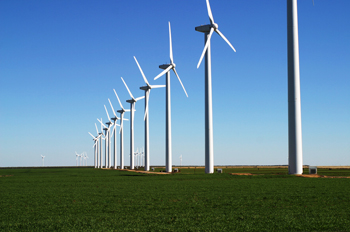 The 205-MW Bison 4 Wind Farm in Oliver County, N.D. was the largest brought in the first quarter of 2015. Source: WikipediaPower Inc., a unit of ALLETE Inc., owns the facility, which is part of the larger 497-MW Bison Wind Energy Center. The project has 64 turbines and cost an estimated $333 million.

The wind production tax expired at the end of 2012, with short-term extensions allowed for projects already started and that met certain other criteria by a certain date. Even so, 10 wind projects totaling 2,166 MW were announced in the first quarter of 2015. That included two 408-MW offshore wind projects in Hawaii.

With 2,802 MW, Texas has the most wind capacity currently under construction. The state has about 14,900 MW of operating wind capacity. Another 19,242 MW is in early stages of development.

By posting a comment you confirm that you have read and accept our Posting Rules and Terms of Use.
Advertisement
RELATED ARTICLES
Wind Industry Added 7GW of Capacity in 2017, AWEA Says
Wind generation passed hydro in 2019, a first
Wind Capacity Passes Hydro in 2016
Race is on to add wind capacity before tax credits expire
This Utility Says It Will Be All Renewable by 2020
Advertisement